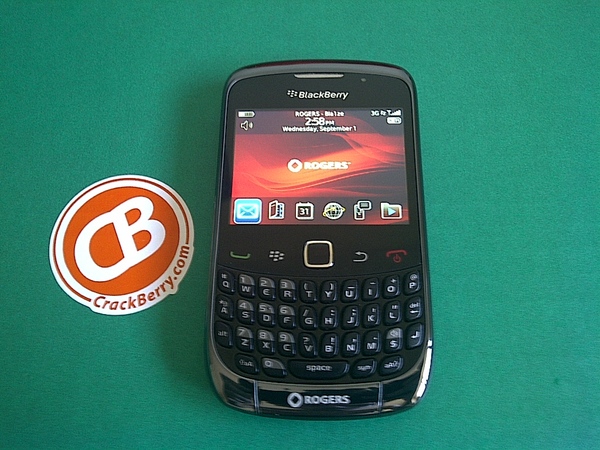 The BlackBerry Curve 3G is the next iteration of one of Research In Motions top selling devices. The latest in the Curve series brings 3G to the GSM side and also boasts its BlackBerry 6 readiness despite having been launched with BlackBerry OS 5 preloaded.

While many BlackBerry users have moved onto a Bold 9700, Bold 9650, Torch or even a Storm series device the Curve series still remains a top seller for Research In Motion and the latest revamp does that particular product line justice.

So no, it's not going to be a device for the hardcore BlackBerry user that needs the latest & greatest but it serves well to those who need a nice, functional and cost effective BlackBerry. It certainly cries out to those out there who may still be using a feature phone and are looking to make the jump to an easy to use smartphone. Read on for the full review after the break.

My first impression when taking it out of the box was not that it looked and felt like an 85xx but rather an 83xx device. I'm not saying this is a bad thing either. The BlackBerry Curve 83xx devices were/are tough and the BlackBerry Curve 3G feels just as durable, whereas the 85xx series did give way to a feeling of "cheapness".

The build quality on this round of the device feels much better. More solid feeling than that of the 85xx series. The trackpad is higher and more raised up where the 85xx series seemed to have them sunk in a little bit too far. As well, the area for the Call, Menu, Back and End keys has been enlarged as well, making them easier to get at and allowing users more "play area" to hit the right buttons when needed.

The keyboard is always a sticky point for me to cover. Ever since the release of the BlackBerry Bold 9000 I have become accustomed to that style of keyboard rather than that of any Curve series device. The only BlackBerry Curve I owned on which I really enjoyed the keyboard was an AT&T Curve 8900. The keyboard on the Curve 9300 is no exception to that. New or previous Curve owners will feel right at home here, but those who have enjoyed the comfort of a Bold style keyboard may have some issues adapting as the keys really do feel like I'm pounding away on Tic Tacs. Granted the keyboard (at least on this unit) was seated firmly and had no wobble or give to it. It was nice and tight as a keyboard should be.

In the end, the BlackBerry Curve 3G on a full charge while using WiFi and occasionally GPS lasted me a full day. Remove the WiFi and GPS usage and I pushed a day and a half out of it just using email, Twitter and BlackBerry Messenger. I'm sure I don't need to say it but I will -- I never used the browser much because quite honestly, coming off of using the BlackBerry Torch it really just irked me to have to use a BlackBerry OS 5 browser again. But the few times that I did use it, it had minimal impact on battery life.

Incoming and outgoing calls on the BlackBerry Curve 3G were an interesting test. I compared it with that of the Torch, Bold 9700 and 8520. Out of all those devices, the Bold 9700 leads the pack for me with the 8520 coming in last. Where would I place the 9300? I'd have to place it ahead of the 8520 but not ahead of the Torch, which would be next in line after the 9700. Calls were loud and clear most times but occasionally it would give a rather hollow sound off and even a slight echo. Rogers has great coverage in my area so I really do think this was more of a device issue rather then a carrier/network issue.

In regards to "death gripping" it, again, I have awesome 3G coverage from Rogers everywhere I go in my city as the above pic shows, even cupping the bottom of the device doesn't cause any drop in signal at all. I'm not going to go all out and say the experience will be the same for you, because chances are it certainly won't be. One of the factors for the whole attenuation issue was that you had to be in a lower quality signal area in the first place, thus covering the device would likely weaken it even further. Where I am soaking in 3G it's safe to say attenuation is not a problem on any of my devices. The only exception to this rule thus far has been a Nexus One that I own which doesn't run on Rogers 3G as it's T-Mobile branded.

Honestly, nothing to write home about here. It's a 2 MP camera with no flash -- you really cannot expect too much from it. Yes, it does fine for those quick pics of the kids, friends and Grandpa trying to muddle his way through using an iPad for the first time, but other than that you're not going to want to be capturing your precious moments with it. Although in my family, Grandpa using an iPad is pretty precious and well, bloody hilarious. Video is the same way -- great for quick clips and grabs but you're not going to be filming your wedding with it that's for sure. In the days of 5, 8 and 10MP devices, no one is buying a BlackBerry Curve 3G for the camera or video capabilities.

With WiFi, GPS and Bluetooth the BlackBerry Curve 3G is a well featured device. Through my testing the WiFi here is quite notable considering that it supports wireless b/g/n. N of course being the most significant since not even the BlackBerry Bold 9700 has that included, although the upcoming BlackBerry Bold 9780 is slated to. While it certainly may not be a selling point to some, to others it is and it works quite well.

In regards to GPS, the BlackBerry Curve 3G is on par with any other BlackBerry on the market today, It spins up and finds your location rather quickly and accurately. Although excessive GPS usage will cause some serious damage to your battery life here. Probably more so then say a BlackBerry Bold 9700 as the battery just isn't enough to cover it if GPS is something you use a lot of.

Speakers are an issue here, and well, speakers have been an issue for me on every BlackBerry device AFTER the BlackBerry Bold 9000. The Bold 9000 was and still is king. Research In Motion has never made another device sound as good as the Bold 9000 did and I'm quite certain they never will. When it comes to the BlackBerry Curve 3G, you will not be impressed in any way. The speakers are hollow and crackly sounding when listening to music through them however headphones are ok. Using the device on speaker phone is ok as well, but as soon as you want to watch a movie or listen to music, that's when you'll notice that they really don't cut it.

The display is something I wish Research In Motion had not of skimped on. The only North American Curve series device to get a higher then 320x240 display was the BlackBerry Curve 8900. The BlackBerry Curve 3G's display, while capable enough, does nothing for me personally. The screen real estate is small and the resolution isn't all that great. Although, if you've never been spoiled by another devices resolution you'll likely not care all that much.

New BlackBerry Curve 3G owners will have no real shortage of accessories to choose from. The fact the device is so similar to the BlackBerry Curve 8520 means that most cases and holsters are pretty much a given to fit the device. The only thing not really compatible would be screen protectors and some fully form fitted cases since the trackpad and keyboard area on the device have changed ever so slightly. You'll be able to find a lot of the essentials for the BlackBerry Curve 3G already available in the Shop CrackBerry Store ready to ship today.

At the end of the day, calling a spade a spade pretty much sums up how I feel this review of the BlackBerry Curve 3G should end. It's a low cost device that is intended for new BlackBerry users and one that carriers around the world will pick up and sell. Even Mike Lazaridis pointed this out in the announcement for it.

"The majority of people in the worldwide mobile phone market have yet to buy their first smartphone and the BlackBerry Curve 3G is designed to provide an extremely attractive and accessible choice that will help convince many of them to make the leap."