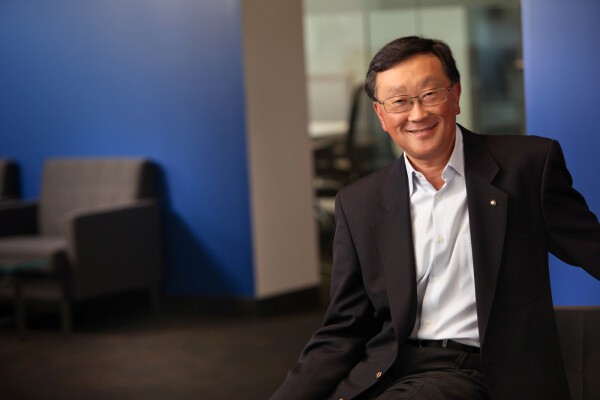 New BlackBerry CEO John Chen has been full-steam ahead lately. He's dropped some great notes to his employees, had his first earnings call and looks to be powering through changes inside BlackBerry HQ. Today, Mr. Chen also had a commentary posted on CNBC that lends a bit more to his overall plan.

Chen starts out by saying that he's "not focused on who BlackBerry used to be", but "on what BlackBerry will be today and in the future." He notes that the company is strong financially and that in under two months, they have already engineered a strategy to stabilize the company. Chen first wanted to focus on the enterprise users along with BES, then moving focus to software and services.

BBM growth has been strong as well since going cross platform in October, and Chen notes that in the last 60 days, more than 40 million new iOS and Android users have registered with BBM. BlackBerry "will continue to invest in this popular service" and has plans to turn BBM into a revenue stream "in the coming years."

We've accomplished a great deal in these last couple months, and we're positioned for the long haul. We have a strong cash position with more than $3 billion on hand, a renewed spirit, and trusted technology, network and platform.

While Mr. Chen doesn't dive too much further into what we don't already know, he does give a great summary and affirmation of what BlackBerry has done so far since he's been at the helm, and also what we can expect from the company in the coming months. We're anxious to chat some more with BlackBerry next week during CES in Las Vegas and find out more about future plans for the company, software, BBM and of course devices -- so stay tuned.

Hit up original post here for the full commentary from CNBC.