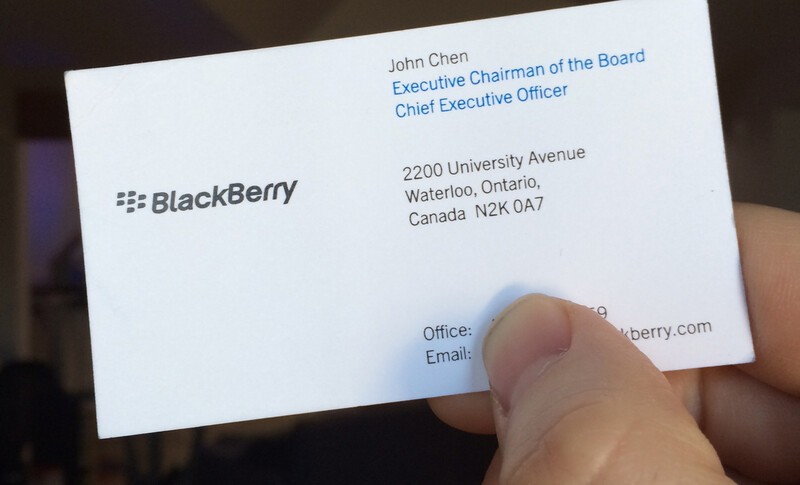 John Chen is the new man in charge at BlackBerry, tasked with restoring the company to profitability and beyond.

Among the first steps he undertook was to re-organize the company around four clear divisions.

“We're going enterprise. We're going messaging. We're going devices. We're going QNX,” Chen explained during a recent lunch interview with CrackBerry in Las Vegas. In the past BlackBerry has been very handset driven, but now the other divisions are getting more attention.

Enterprise is crucial to BlackBerry’s turnaround in 2014.

“We need to get the enterprise customer interested in us again,” Chen said. “That's a tall order. The market has slid very quickly in the last 12 months.” He added that “the good news is that I have talked to enough customers, and they do believe in our security advantage, and they do like to see us win. There's a lot of goodwill out there still. But we have our work cut out for us on that.”

"There's a lot of goodwill out there still. But we have our work cut out for us on that"

Chen plans to use BlackBerry’s multi-platform device management solutions to win back enterprise customers. But to do that BlackBerry first needs to decouple the brand from being thought of as mainly BlackBerry handsets.

“BlackBerry is about security, about productivity, and about communications. I think those could agnostically be put on anything,” Chen added.

Chen acknowledges that BES needs to continue to evolve to meet the needs of the modern enterprise, and he wants grow the server solution into a “enterprise mobility computing engine.”

“BES actually today makes money. It's just not growing,” Chen said. “In fact, as BB7 got retired, it's going the other way. I need to add the features and functionality to go back the right track,” he added.

"There is a need for a very good integrated solution"

“Almost all the enterprises in the world today are dealing with mobility in one form or another. Most of them are doing this somewhat piecemeal, somewhat sporadic. For example: They would develop mobile applications for one platform, then they provision them on a different platform, and then manage it on a third one, and they analyze on a fourth one — and they shouldn't have to do that themselves. There is a need for a very good integrated solution.”

“This is going to be the next BES — so call it BES, 11, 12, 13, 14. But we’ve got to get into how enterprises manage mobile applications — develop, provision, identify, authentication, and so on down — and press a lot more on security.”

"We're going to protect their investment in iPhone, and Android, and everywhere else, even with Windows Phones"

“I could put a sales team on Wall Street. I know how to do this up and down Wall Street …  we will go in and tell them why BES is the best thing for them, and go through the road map, the offerings, and all that good stuff. We're going to protect their investment in iPhone, and Android, and everywhere else, even with Windows Phones.”

Chen also told us that a cloud-based BES solution will soon be available - the BES10 Cloud. Current BES implementations require companies to host and manage dedicated servers, which requires upfront and ongoing investments. By moving BES to the cloud, implementations can be rolled out faster and server management becomes BlackBerry’s responsibility. Several CrackBerry members reported last month that they had been invited to a “Market Preview of BES10 Cloud”, and so far seem impressed by the service.

On messaging, Chen is very happy with the recent multi-platform launch of BBM messenger. “That was the first time that we de-coupled the brand from the BlackBerry handset, and as you can see, the results are very exciting. You've got 45 million BlackBerry users, you got 40 million Android/iOS users, so 85 million users for social messaging. It's getting up there.”

While BBM is not currently producing revenue, Chen sees it is a long term-investment. “When we monetize it will do very well. Right now it's not, we're losing money on BBM. But it's an investment state. This is why a portfolio approach is important, because if you just purely look at,  - Oh, I've got to make money on everything I do -  then BBM needs to stop. But if you stop BBM, I think that's very shortsighted. I think that's ridiculous. That's my opinion.”

With massive writedowns in the device division, it would be understandable if Chen would be hesitant to keep it going. But from day one he has championed their existence.  “I am never going to give up designing phones. I may not build it, but I'm going to design it. I think it's a very important thing.”

One way Chen is trying to limit the losses is to partner with Foxconn, making them an non-exclusive manufacturing partner for BlackBerry’s emerging market phones. According to Chen, they “have the volume purchase power that I would never come close to getting, for the typical common parts that the industry uses, probably 75 percent of our phone. We can make it a lot lower cost, same price, same standard, and I think that's just a win-win for everyone.”

Chen hinted that he is looking for additional partners as well. “I love to partner with a lot of people to go after a lot of different markets.” He added “Foxconn can't go everywhere, because they're not a sales engine, but they do have relationships in a lot of places, Indonesia being one, China being one, India, Vietnam, and Malaysia, and a number of African countries.”

John recently hired Ron Louks to lead the handset division. Ron has been in the mobile space for a long time, including as Sony Ericsson's CTO and as HTC’s Chief Strategy Officer. With Louks appointment,  Chen feels he now has “good phone people with good phone experience” on his management team.

“I truly believe the phone is like the movie business, you are one hit away from being great again”, Chen added.

“The easiest thing to talk about is QNX,” Chen boasts. “QNX is a market leader in the automotive competitive industry — a lot of design wins, a lot of model cars, getting royalty, high-margin, but has been kept reasonably small. I think that the whole vision of machine-to-machine mobile computing is going to be the future. I think there are a lot of verticals that need QNX, and there are a lot of devices needing QNX outside of phones.”

"By the way, when it comes to royalty, it's pure margin"

At CES last week NVIDIA among others announced their increased efforts with automotive tech, which Chen sees as validation of the space. “It's going to be a huge industry, and we have 40 OEM wins, so we're well on our way to being the number one leader. Everybody recognizes that.”

Chen added that “QNX makes money. We're not making enough. But three years out, who knows? You get enough design wins, this thing is going to go far up. By the way, when it comes to royalty, it's pure margin.”

Still looking for a turnaround

The ideal North American customer in 2014 “is going to be more towards the regulated industry,” Chen said. “They will be the banks, the insurance companies, the health care, the governments, state and federal.”

Consumers are still on the radar, but Chen said BlackBerry has to win the regulated industry first.

“My number-one objective is for the company to generate cash again — cash-flow positive — and start making money while investing in these areas we talked about. Once we get there and we are getting a good engagement model in the regulated industry, after that I think then the opportunity really opens up.”

Chen didn’t dwell on the BlackBerry 10 launch and lack of carrier support, specifically in the critical retail store experience. Many CrackBerry members reported that they had trouble finding BB10 phones in stores, and that retail store staff often attempted to talk members out of buying a BB10 handset.

“I do understand why and how it happened, I'll let that speak for itself. … When I go after the consumer through these stores again, it's not going to happen the same way again. When I'm ready to make that move, we're going to have another conversation.”

When asked to reconcile the somewhat conflicting positions of focusing on regulated industries yet introducing new low-end devices in emerging markets, Chen felt it was crucial to continue to build brand awareness in those market.

Chen also told us he has no problem recruiting new talent for BlackBerry: “There are a lot of good talents who would love to help us to do this turnaround. Everybody knows with their eyes open, this is not a slam dunk. But this is a big enough deal, when we could turn this around, that's a big deal for the market, for the individuals, for everything.”

Chen had one important message to CrackBerry readers.

“Keeping the faith is very important, because it'll get better.”

"Keeping the faith is very important, because it'll get better"

Without loyalists, Chen feels it would “make the job about 10 times more difficult.” Internally, he is also telling employees that "we're going to fight a good fight."

“I hate to use this as an example, because I'm not trying to imply anything. But when Apple ran into trouble, Steve Jobs went back to the company and he focused back on the loyalists.” Chen paraphrased a speech Steve gave when he returned to Apple: "I'm going to go back. I don't have any announcement to make. I'm just going to say that my customers are important."

While introduced as an interim CEO, Chen has decided to stay for the long-term.

"I am now the chairman and CEO"

PART II: Read Five Important Observations from having lunch with BlackBerry CEO, John Chen for Kevin's takeaways from this interview