Video PlayBook 101: BlackBerry Bridge Walkthrough. Be sure to read this article so you understand why you won't (likely) want to pay for a tethering plan for your PlayBook, even if your carrier tries to sell you one!

Key Point: BlackBerry Bridge and Internet Tethering are different things, but they can accomplish many of the same things. The Bridge way is free. The Tethering way may not be. Depending what you plan to do with your "tethering", you can likely accomplish it via the BlackBerry Bridge meaning you do not need to buy a tethering plan. 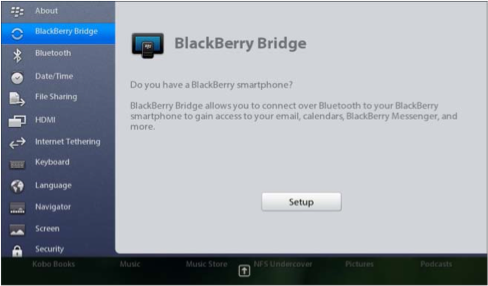 We previously explained that the BlackBerry Bridge and Internet Tethering are two distinctly different modes of connectivity on the BlackBerry PlayBook. Within the settings menu, they are two separate options as shown above.

Tethering: The concept of Internet Tethering is pretty simple. On a device like the WiFi-only PlayBook, it means you can connect (in this case via Bluetooth) to another mobile device to make use of that device's data connection for things like web browsing, running apps that require data, etc.. The PlayBook can tether with any mobile device that supports the DUN (dial up networking) protocol. It does not have to be a BlackBerry. As for charges related to Tethering, it depends on the carrier. If you own a device like a BlackBerry on AT&T, you won't be able to Tether to your BlackBerry PlayBook to it without first calling AT&T and adding a tethering option to your plan (Adam verified this with his PlayBook on AT&T today). On a carrier like Rogers, who includes a gig of free tethering, you can setup the PlayBook for Internet Tethering no problem.

The Bridge Browser allows you to, you guessed it, browse the web, and the way it acts is based on the same concept as the other apps - it's a mirror connection of what's on your BlackBerry Smartphone. So instead of web browsing via the dial up networking connection, which the carriers could track and charge tethering charges for, with the Bridge Browser it's really your phone doing the actual browsing (it's as if you were holding your phone in your hand and visiting the website), but thanks to the Bridge connection your PlayBook gets to display that mirrored copy of the content on your PlayBook, which you get to view and interact with just the same as if you were tethered and using the standard browser on the device. So while you can think of it as free tethering, it's not really tethering in the traditional dial up networking sense, but it's accomplishing the same thing. You're browsing the web thanks to your BlackBerry Smartphone. It's a sneaky trick that carriers are going to HATE, but it's awesome for consumers.

One thing to note currently, is that with the BlackBerry Bridge connection right now you only have this 'mirrored data connection' for apps that are part of the BlackBerry Bridge. So if you try to open an app that requires data, like the weather app, no data connection will be present (even though at the same time you can still browse the web or BBM or email thanks to the Bridge). However, with time, I can totally see RIM using this same bridge protocol to make more data-using apps work for free, with no need to tether in the traditional sense.

Why is this a BIG DEAL? Think about it. Considering the Bridge will let you get your email, BBM and browse the web for free, there's basically no need to spend any money on buying a tethering plan (especially if RIM continues to expand what apps can make use of the Bridge). For companies looking to roll out tablets to their employees, especially ones that already have their employees using BlackBerry Smartphones, this becomes a big cost saver as you won't have to spend any more money on carrier data.  And for average joe consumer it's great news too. Considering it's looking like Sprint wants to charge $29.99 per month for tethering on the PlayBook, by being able to avoid tethering charges thanks to the Bridge Browser and other Bridge Apps, you'll nearly save yourself $360 a year (that's getting close to the cost of the PlayBook itself).

Conclusion:  So when you read/hear people saying you can Tether for Free if you have the BlackBerry PlayBook and a BlackBerry Smartphone, just remember... it's not really Tethering for Free as the carriers think about it. It's moreso that you won't need a tethering plan and will mainly be able to accomplish the same thing via the BlackBerry Bridge (including web browsing) as you would if paying for Tethering and connecting your BlackBerry (other mobile device that supports bluetooth tethering) to your PlayBook via traditional Tethering instead of the BlackBerry Bridge way of "tethering." If this still sounds confusing (and I know it is confusing)... check out the video above which further explains it and shows the Bridge apps in action. Enjoy!!

PS. Note, there's no BBM in the video as it's not present yet on the pre-release version of the Bridge I'm using. We're told an updated version of the BlackBerry Messenger phone app is required for it to work on the Bridge, which isn't released yet. It should be there on launch day or shortly after.