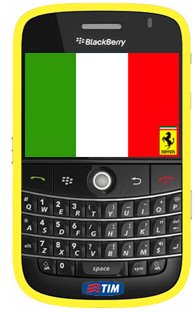 Stefano from BBWorld.info sent in an excited-email earlier today letting us know the BlackBerry Bold should be coming to Telecom Italia Mobile (TIM) the second week of July.

Following up on the pricing and availibility info, Stefano posted a second rumor today... this one touting that TIM may be looking to brand the 9000 as the BlackBerry Goldfinger rather than BlackBerry Bold. CRAZY. It likely won't pan out, but how cool would that be?!

We know how the carriers like to try and differentiate from the competition in colors (think Pink Pearl or Gold Curve) and a phone named Goldfinger that doesn't feature any Gold would be kind of silly. We've been wondering if and how RIM could lipstick up the Bold for different carriers and maybe the way to do this beyond changing up the theme and carrier logo would be swapping colors of the band around the phone. This likely won't happen - by being "Bold" RIM is likely making the statement that the phone's appearance won't be altered for anyone. But we already know that RIM is going to offer the battery cover in different colors, so who knows. But calling the 9000 the Goldfinger and wrapping a Gold Band around the 9000 would be HAWT! A lot of folks are saying the Bold has an iPhone-esque look to it... changing up band would further help to differentiate.

As for the Prancing Horse on the Italian Flag wallpaper... the Grand Prix of Monaco is this weekend and we figured all of the Tifosi reading this would enjoy a little shout out to the Scuderia Ferrari :-)