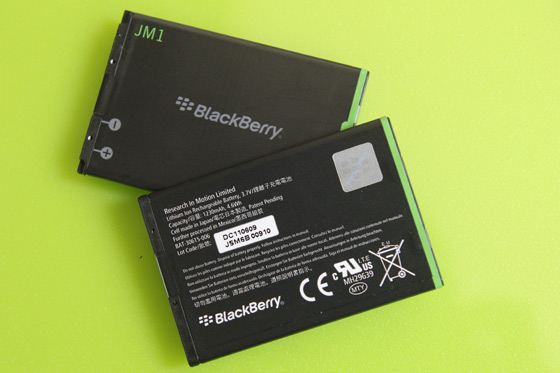 Running Low on Battery life? Buy a spare battery for you Bold 9900/9930 from ShopCrackBerry.com!

* Update 3: If you're experiencing poor battery life on your Bold 9930/9900, be sure to read our article on 10 Tips to Maximize your BlackBerry Battery Life! *

* Update 2: We're finding a real big difference on the Bold 9900 in battery life depending on whether or not we're using WiFi. If we're connected to WiFi, we can literally go 25+ hours between battery charges, with three to five hours of actual device use. If we stay in the same locations, but disable WiFi, the battery can go low in half that time with even less usage. So use WiFi whenever you can. *

* Update: It's really interesting to read through the comments from this blog post, especially from those Bold 9900 owners reporting bad battery life, as when its bad, it's apparently really bad. It's strange to see such variation here. For example, right now as I type this my Bold 9900 is at 55% battery remaining and it's been off the charger for 12 hours today - pretty acceptable considering I've been using it quite a bit, but there are some people reporting batteries dead in as little as 6-8 hours, which just seems out of whack (like there has to be some sort of issue causing the rapid drain - it just doesn't make sense that normal use would do that). You'd think if there was a major mass issue - like the battery was too small or the OS build was bad, then all users would experience the issues. We're going to get more scientific about this battery life testing and try to figure out exactly what factors are causing great battery life and seemingly poor battery life. Hopefully we get to the bottom of it asap so all Bold 9900 owners are getting acceptable battery life.  *

I actually had all of this written up as part of the Hardware Analysis > Battery section of our upcoming full review of the BlackBerry Bold 9900, but decided it would serve better as a standalone post (the full review is long enough as it is) so I can just post the summary within the review and link back to it here for those who want the full details.

I've been charting my Bold 9900 device usage and battery life for five days, as have our own Adam Zeis, Bla1ze and even Miss CrackBerry, and the conclusion on our end so far is that the battery life overall is pretty solid and on par with expectation RIM relayed to us of getting a full day of use out of the battery. Between the four of us we had a pretty good spread of usage cases, from Miss CB being a fairly light user (a lot of messaging, some phone calls, and some web browsing) to crazy 'ole Bla1ze being on his BlackBerry more than any normal person should, doing just about everything he can think of.

Here's how battery life has normalized out for us so far over the course of 18 hour days. Consider the below as taking the fully charged Bold 9900 off the charger at 6am, and putting it back on the charger for bed at midnight:

Looking at our numbers based on going 18 hours between charges, things are looking pretty OK here. Average users shouldn't have to worry much about battery life, if at all, while heavier users might may find themselves wandering into the low battery zone a little more often than would be the case on say the Bold 9700/9780, which sports a 1500mAh battery as compared to the 1230mAh battery in the Bold 9900. Keep in mind there are a ton of things you can do on a BlackBerry to affect battery life, and our numbers/averages above are based on a pretty small sample size and just two networks (3 of us on Rogers, 1 on AT&T).

Throughout the days of paying careful attention to our battery levels, and in talking to other Bold 9900 owners and hearing what they're experiencing, we've made some other observations that we're going to pay attention to over the weeks ahead. For one, we're finding battery life *appears* to last noticeably longer when connected to a WiFi network (more so than we've ever noticed in the past with other devices). Also, we've had a few reports of poor 9900 battery life come in, and in these cases it seems the users were in lower coverage areas (at the cottage) or on the move with frequent tower changes happening on the network (driving on highway in rural areas). What makes these cases interesting to us is that they're coming from people who previously used the Bold 9780 in the exact same places/route without that sort of issue. It could be there's still some software tweaking to do here to get things 100% perfect.

Again, it's early days still, but for the most part things are looking like a thumbs up on the BlackBerry Bold 9900's battery life, which is a topic people want to know more about. So, if you've bought a Bold 9900 and been using it, let us know how you're finding the battery life so far in the comments!