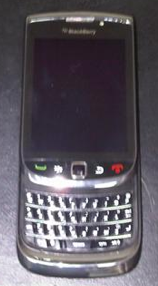 This morning BGR dropped a post stating that the BlackBerry Bold 9800 Slider may be rolling into AT&T sooner than RIM may have lead us to believe at WES. The device is rumored to be arriving in June, and since we know the Bold 9800 will be running BlackBerry 6, it makes the arrival of OS a bit earlier than many of us were expecting (RIM ahead of schedule... who'd a thunk it?!). During the WES 2010 keynote and capital markets presentation the day earlier, RIM Founder and Co-CEO Mike Lazaridis told us we'd see BlackBerry 6 before the end of the "next calendar quarter". This essentially bought them time right through to the end of September if necessary, but knowing RIM history of product launches, we'd normally expect RIM to use every bit of the time frame they promised. So it's quite a pleasant surprise if this actually holds true -- it shows RIM is starting to pick up the pace -- so maybe we can hope to see BlackBerry 6 drop around the same time or soon after for other supported devices as well (not that we fully know what in-market devices will be supported). No shock either that the device will be on AT&T at the start, we've been saying that since the first day slider images announced. I'm getting the feeling it'll be a busy summer in BlackBerry land!