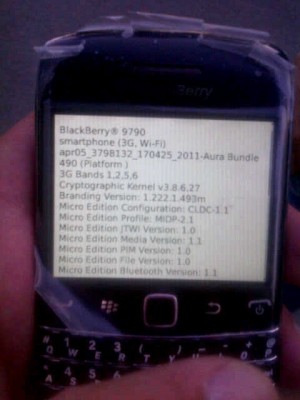 If you're seeing this post and thinking to yourself what the heck is a  BlackBerry Bold 9790? you're not alone. We're kind of stumped by the existence of this one, though I'm thinking it's the device we have talked about previously that went by the codename Onyx III. With a look that's very similar to the BlackBerry Bold 9780, the 9790 shown in the photos (more pics below) apparently packs a lot of the next-generation stuff that we'll be seeing in the BlackBerry Bold 9900/9930, including:

And apparently the device is very thin and very fast (making us think it has a pretty decent processor under the hood). While the device really looks like a refresh to the BlackBerry Bold 9700/9780 form factor, I can't help but think this is a prototype that will never see the light of day as it was usurped by dakota/montana (9900/9930). Back in June 2010, prior to the release of the Bold 9780, we talked on the CrackBerry blogs about Onyx II and Onyx III and that while the Onyx II (Bold 9780) would not feature a touchscreen, that the Onyx III in the same form factor would. So based on the information we had back then, it makes sense that we're seeing some visual proof of this device existing. Though it seems somewhere along the line RIM must have made the call to scrap the Onyx III form factor and make the next-generation BlackBerry Bold wider like the original 9900.