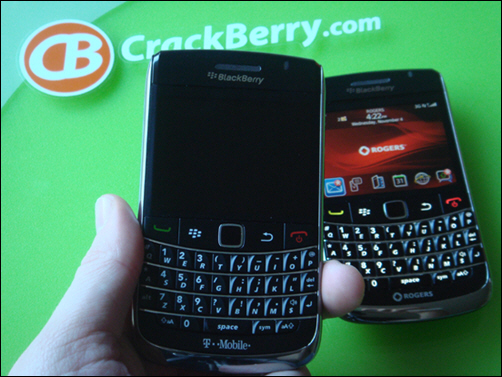 Whenever I write a review for a new BlackBerry Smartphone, it tends to turn into a 6,000+ word novel. Not this time. For one, Chris, Adam and Craig are all writing their impressions of the BlackBerry Bold 9700 too, each coming at it from a slightly different user perspective. Between us there will be no shortage of Bold 9700 coverage on the blogs. Also, I did a pretty thorough job of covering the BlackBerry "onyx" back in May when we showed everybody what the new BlackBerry Bold 9700 would look like. But most importantly and to the point, this is just an easy BlackBerry to write about. It's a straight forward story about an all-around stellar device.

The BlackBerry Bold 9700 is simply the best of everything that Research in Motion currently offers in a smartphone, wrapped into a tight package. I'm sure there will be some Bold 9000 owners out there who may prefer the styling and bigger keyboard/screen size of the original Bold over the smaller and arguably more conservative 9700, but the 9700 meets or exceeds the 9000 on the features and specs sheet in areas that count: more memory, bettery camera and gone is the trackball in favor of the ohhh sooo slickkk optical trackpad. The BlackBerry Bold 9700 really is the pinnacle of the "traditional" BlackBerry Smartphone experience.

An Intro and Overview of the BlackBerry Bold 9700

Just like the BlackBerry Bold 9000, the BlackBerry Bold 9700 is rolling out on GSM carriers around the world. This time around though, T-Mobile USA is joining in on the fun with their own version of the device which features the HSPA bands required for their new 3G network. The T-Mobile version also allows for WiFi phone calls (awesome!). AT&T has never really been one to embrace UMA calling so it's no surprise for AT&T's 9700 not to include it, but it is unfortunate that Rogers in Canada (who offers WiFi calling on devices including the Curve 8320, 8900 and 8520) chose to not give WiFi calling support to the Bold 9700. WiFi calling discussion aside, the BlackBery Bold 9700 is an all-in-one smartphone that offers 3G, GPS and WiFi in a form factor that's small - it's more like a Curve in terms of dimensions than a Bold.

I was just about to start writing about the look and feel of the BlackBerry Bold 9700, but realized I said it all in our pre-release review. Check it out if you haven't. Though in our pre-release review, our early BlackBerry "onyx" hardware actually had a trackball and not the trackpad. In that article I prayed and pleaded for RIM to include the trackpad on the Bold 9700, and here it is! I'm sure it had nothing to do with what I wanted but rather simply timing on when they would rollout the trackpad on future devices, but am VERY glad to see it here. Just as the change from trackwheel to trackball was a big leap for hardcore BlackBerry users, so is the change from trackball to trackpad. It takes a little time to get used to, but if you go back to a trackball device after using the trackpad for a week the ball just feels dated. I'm also glad to see that some faux leather made it's way onto the device. Our pre-release onyx was still sporting a plastic door, which made it a little un-Bold like. The Bold 9700 is a sharp looking device, but definitely is not as blingy as the original Bold.

A hands-on look at the BlackBerry Bold 9700

Diving into some of the specifics that are unique on the BlackBerry Bold 9700...

Battery Door: Another new BlackBerry, another new design for the battery door. If you watch the unboxing video above, you'll see I ran into some issues for some reason with the new friction fit/slotted groove design. Even after following the directions in the manual and pushing down from the top (vs. pulling down), I still found it very difficult on three units now (one T-Mo, 2 from Rogers) to pop that cover off without feeling like I was hurting the device. HOWEVER, I soon discovered that it wasn't the design at all... just me. Watch the video below to see just how awesome the battery door design really is:

MicroSD Card Slot: The location of the MicroSD Card slot on the BlackBerry Bold 9700 is new for RIM. They snuck it above the battery and under the camera assembly. When you pull the battery door cover off the device, it's amazing to see just how clean everything is under there. Top notch engineering.

Keyboard: The BlackBerry Bold 9700's keyboard is similar to the BlackBerry Tour's with the exception that the bottom row of keys is slightly less tall. Overall, it's a nice compromise in terms of size and comfort between the Curve keyboard and the original Bold's keyboard. Over the past couple of my month's I've been using my Bold's 9000 as my main device, so have come to really love it. It's funny, when the Bold 9000 first came out I was one of the people who felt it was just too big. It's funny how times change - now I appreciate the extra size in the keyboard and extra 1/4" of width on the screen. It's enough to nearly wish RIM would do a straight update of the Bold 9000 form factor, but up the memory and camera, switch to MicroUSB and put the MicroSD card slot under the battery door. But keep that keyboard and screen going in an updated device.

Other Stuff - I haven't had much of a chance to actually put this final commercial hardware to the test, so commenting on things like battery life, voice quality, etc. I can't do until I log more hours. But it's safe to say that things ilke the Camera, GPS and WiFi will work as well as they have in recent device models.

So far in the images and video above we've only had a chance to look at the BlackBerry Bold 9700 as it is by itself. Be sure to watch the video below to see how the new Bold stacks up to its siblings. It's almost surprising to see just how much smaller it is than the Bold 9000, considering its improved specifications.

The BlackBerry Bold 9700 definitely has what it takes to be considered the current flagship of the BlackBerry Smartphone line. It doesn't immediately make a device like the 9000 obselete, and obviously RIM must agree with that considering they just released the Bold 9000 in white. At the same time, I'm pretty sure the Bold 9700 wil quickly become the staple device for Wall Street, business executives and professionals very quickly. But that doesn't make it a business-only phone.

I want to keep this short so I can get off the computer and go log some real use on my new BlackBerry Bold 9700. Keep it logged to the blogs and we'll do an update in a week or two to let you know how its holding up. But I'm pretty sure the answer to that already is extremely well.

The BlackBerry Bold 9700 embodies the spirit of what made RIM dominate the enterprise market and become the HUGE player in the smartphone market that they are today. The BlackBerry Bold 9700 is the ultimate communication and productivity tool. Fast, reliable, secure. Easy to use one-handed while you're on the go (walking or stopped at a light...not while driving of course!).

It's for shakers and movers who have stuff to do and need to get it done five minutes ago. But between the incremental improvements seen as we move into OS5.0 and the growth in BlackBerry apps, RIM is also getting much better at turning the device into a fun gadget for when we all get that little downtime that we need.

What I'm really curious to see, is where RIM goes from here. The BlackBerry Bold 9700 features the best of everything RIM currently offers. But we know RIM loves to innovate. I wonder what they're cooking up next in Waterloo?!