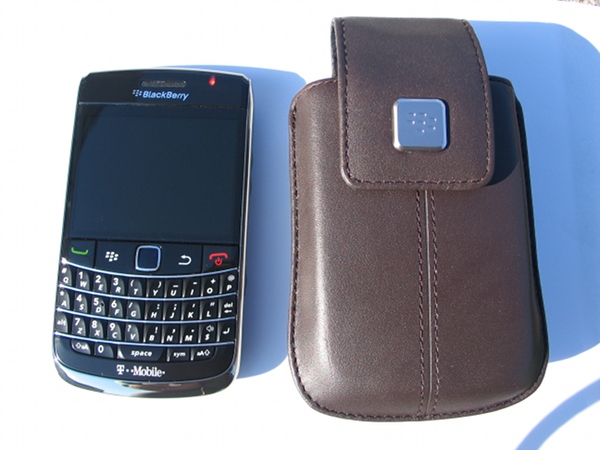 While Kevin, Chris and Adam are concentrating on the hardware and consumer aspects of the Bold 9700, I'll be reviewing the device through the eyes of a corporate BlackBerry user. If you are someone who already has a BlackBerry and is wondering if they should upgrade to the Bold 9700 when it is released.

The BlackBerry Bold 9700 is the most beautiful and stylish BlackBerry to date. It oozes class and sophistication, from the angled edge on the sides of the screen, to the flush finish made possible by the optical trackpad, to the chrome edges, and leather battery cover.

Owning a BlackBerry puts you in a class all of your own to begin with, but owning the BlackBerry Bold 9700 projects an image of success. This BlackBerry looks and feels very well made. Nothing is even slightly loose. The keys don't wiggle, and the battery door is firm when latched.

As a business person you always want to project an image. For example a CEO isn't going to pick up his clients in a Toyota Yaris. He's going to show up in a Cadillac, Mercedes, BMW, or Audi. This extends to the boardroom. Carrying the BlackBerry Bold 9700 is an extension of driving that Cadillac. Your clients and colleagues will be impressed and I'm sure jealous.

RIM has paid so much attention to detail that even the battery compartment is beautiful. The Micro-SD slot is now right at the top of the device out of the way, and the only slot still in view is the SIM card slot.

The keyboard on the BlackBerry Bold 9700 is very well crafted. I was a little worried about the keyboard after using the old Bold 9000's keyboard for so long. It does not disappoint though. The keys are a little smaller than the Bold 9000, but a bit larger than the Curve. The keys have the original Bold design where they have a very small gap between them and the inner edges slope down. Like the original Bold, the keyboard has a very luxurious feel. The keys have a soft but sure-footed feeling to them. The click feeling and sound are both dampened.

I think that this keyboard is just as good as the original Bold 9000's keyboard, even though it is slightly smaller. The keyboard on the Bold 9700 really does allow you to type quickly and for extended periods of time. Both important features for the business professional.

While the CPU at the heart of this new BlackBerry is not officially known, it is rumored to be running at 624MHz. It certainly feels like this Bold 9700 has lots of horse power to spare. It's like driving a Cadillac CTS-V. As you drive it, you can feel that it is not trying very hard at all to move you around. It is the same with the Bold 9700. It handles all of the tasks you throw at it easily, almost taunting you to load up a large PowerPoint presentation for it to crunch on.

The T-Mobile version of the BlackBerry Bold 9700 is T-Mobile US's first 3G BlackBerry. Being the last US carrier to roll out a 3G GSM network, they were only able to pick up frequency ranges that no other GSM carrier is using. This meant that while any 3G GSM phone would work on any carrier around the world, it would not work on T-Mobile's 3G implementation. The T-Mobile BlackBerry Bold supports UMTS bands 1, 4, and 8 (2100 MHz, 1700 MHz , and 900 MHz). In contrast, all other Bold 9700's will support UMTS bands 1, 2, and 5/6 (2100 MHz, 1900 MHz, and 850/800 MHz). Both versions of the BlackBerry Bold will work on UMTS 3G networks outside the US.

To me it generally felt like this BlackBerry was able to download attachments and web pages faster than I normally see.

The BlackBerry Bold 9700 came with OS 5.0.0.330. It seemed very refined, fast, and visually appealing. OS 5 brings a few new features to the business professional that will be welcomed.

The ability to flag emails is a huge time saver. When you flag a message, you can choose the action to take. For example Follow up, Call, Review, or Do not forward. You can choose the color of the flag, its status, and if it is due by a specific date. This is an extremely useful feature to have while on the road. For the flags to synchronize back to your corporate email system, your company must be running BES 5.0 or later.

OS 5 allows you to open files attached to meeting requests. It also allows you to forward a meeting to someone. As a travelling professional, these 2 features will allow you to work more efficiently.

OS 5 adds Google Gears support. This technology allows the BlackBerry to take advantage of more powerful web applications. Gears lets applications interact with the BlackBerry, store data locally on the BlackBerry in a fully searchable database, and runs JavaScript in the background for browsing speed improvements.While Gears web sites are not that popular yet, they could become more widely used and you will be ready for them. In addition your company can use Gears on their Intranet to make interacting with your companies internal web sites more efficient.

T-Mobile (and maybe other carriers) will be offering Visual Voicemail for the BlackBerry Bold 9700. As with other visual voicemail systems, you do not have to call into a voicemail center to retrieve your voicemails. As soon as someone leaves you a voice mail, it is pushed to your BlackBerry.

This means that you can listen to your messages while out of coverage, even save the audio files on your BlackBerry and attach them to emails. Voicemails appear right in the Messages application along with your emails.

Visual Voicemails is a time saver, and adds flexibility to the whole area of voice mails.

The BlackBerry Bold 9700 supports Unlicensed Mobile Access (UMA), also known as GAN. This technology allows your BlackBerry to switch seamlessly between the 2G or 3G cellular network to Wi-Fi networks and back again. This happens in mid-call with no interruptions.

It has 2 main benefits.

As a business professional, saving money is always a top priority and this new BlackBerry enables you to do so, as long as your carrier supports it of course.

The BlackBerry Bold 9700 has a beautiful 480x360 pixel screen and includes DocumentToGo. This allows you to not only download and store email attachments, but to edit them too. The screen provides enough space to comfortably read documents, presentations, and spread sheets, even adding the ability to freeze panes so that rows freeze in place as you scroll through a spreadsheet.

Simple document editing can be done for free, or by upgrading DocumentsToGo, more advanced editing like inserting rows in tables in Word documents, or AutoSum in Excel can be leveraged. Once documents are edited and saved, the new version can be emailed right from the BlackBerry.

While I have not had the Bold 9700 long enough to really test out battery life, it seems that after 2 days, the battery may last longer than the original Bold 9000. A long battery life is very important for the business professional that is always on the phone, checking email, or browsing the web. The official battery figures are:

The BlackBerry Bold 9700 saves time, saves money, allows you to be very productive on the road, type long emails, edit documents, and talk for hours on the phone.

This is the most beautiful BlackBerry yet. It is stylish, sophisticated, powerful, and fast. The BlackBerry Bold 9700 will impress in the boardroom, but is still very capable of taking stunning pictures with its 3.2 Megapixel autofocus camera, playing movies, or music while on holiday or over a weekend.