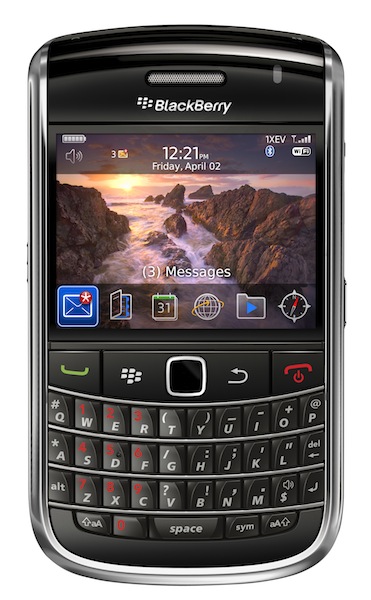 Today at WES 2010 in Orlando, RIM has finally announced that the long awaited Bold 9650 will be coming to North American networks in early May. The device will support 3G and have both Wifi and an optical trackpad. As expected, the device will also be rocking a full 512 MB of flash memory, which should allow for OS 6 down to fly when it gets released down the road. No official date just yet, but we should know more in the coming weeks. Hit the jump for the full release.

CDMA customers get a bold new choice with powerhouse 3G smartphone that offers premium features and performance together with popular keyboard and trackpad, as well as support for Wi-Fi and high-speed 3G networks around the world

The BlackBerry Bold 9650 smartphone supports 3G (EVDO) networks in North America and (HSPA/UMTS) abroad and has a full-QWERTY keyboard, optical trackpad and built-in Wi-Fi® (802.11 b/g), which makes it possible to talk on the phone while browsing the web or sending and receiving email. The BlackBerry Bold 9650 also includes 512 MB Flash memory and an expandable memory card slot that supports up to 32 GB microSDHC cards, with a 2 GB card included.

The BlackBerry Bold 9650 fuses form and function in a striking design and, in addition to providing premium phone and multimedia features, it of course delivers the industry's leading mobile solution for email, messaging (IM, SMS, MMS) and social networking.

Other key features of the BlackBerry Bold 9650 smartphone include:

The BlackBerry Bold 9650 smartphone is expected to be available from carriers in the United States beginning in May. For more information visit www.blackberry.com/bold