Normally this is the week the CrackBerry team would be in Orlando enjoying the sun and hanging out with ~5,000 other fanatics at the BIGGEST BlackBerry event of the year. With no BlackBerry Live event taking place this year, we're taking a few days to look back at some of our favorite moments from the BlackBerry Live / BlackBerry World / WES events we attended in previous years.

WES 2008 was a HUGELY memorable event for me. In a lot of ways, it was our coming out party (for lack of a better term). At WES 2007 almost nobody knew who or what CrackBerry was. The site was still very new and our audience small. That changed in a BIG way at WES 2008. This was the event where BlackBerry officially unveiled the BlackBerry Bold 9000.

The thing was, CrackBerry unofficially unveiled the 9000 the week before. A BlackBerry 9000 showed up for purchase on eBay, and I was FAST to scoop it up. When it arrived, I reviewed the living hell out of it. With the 9000 being a highly anticipated phone, that story went EVERYWHERE. To this day that initial Bold 9000 walk through video is one of our most popular videos of all time. Showing up at WES 2008, it was like everybody knew who I was and about CrackBerry, in a large part thanks to that 9000 scoop.

Though we beat BlackBerry to the punch in terms of showing off the device, it didn't deter from the excitement. On stage, BlackBerry founder Mike Lazaridis talked up the new phone, and BlackBerry set up a special room for the Bold, where conference attendees could check out the new hardware. And man oh man, did people love the new hardware. Bold was a fitting name for the 9000. With its leather back and wide body design that featured lots of plasti-chrome touches, the phone stood out. To this day, if you ask BlackBerry aficionados (like Bla1ze, Adam or I) what our favorite BlackBerry of all time was, we'll all tell you it was the 9000. This phone was PIMP. What took it over the edge of awesome was the ability to customize the leather door via Coveroo. 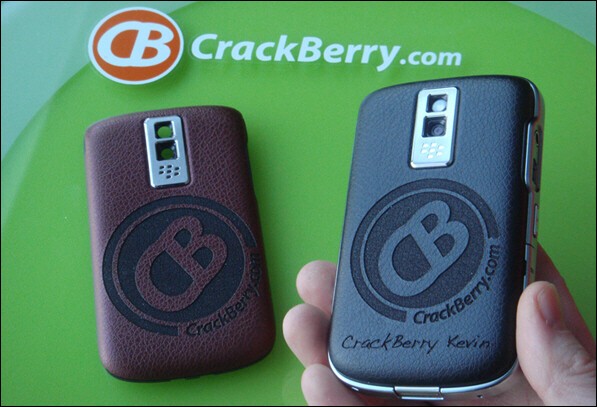 The BlackBerry Bold 9000 enjoyed a lot of success over the next couple of years. Looking back, it was simply awesome to have been there to experience its debut first hand.