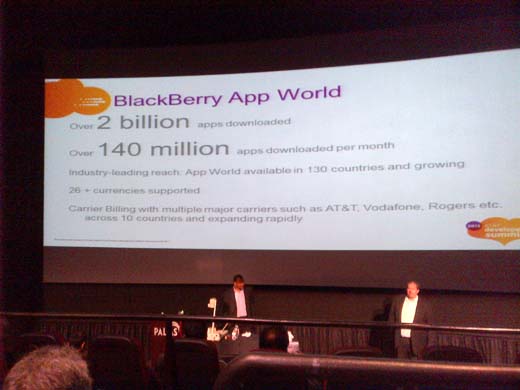 On the eve of CES 2012, it was great to sit in on one of the RIM sessions at the ATT Developer Summit. Maurice White and John Mutter, RIM's Enterprise Mobility Architects, gave a presentation on Developing Super Apps for the BlackBerry OS and BB10 platform and what it means to be a Super App. One of the points they brought up though is the current stats of BlackBerry App World. When comparing to the other popular markets out there, it's cool to see exactly where App World stands in the global marketplace and how it stacks up against its competitors.

The market is filled with tens of thousands of apps that cover a variety of needs ranging from social networking apps to utility apps and much more. What do you think about this important milestone and on the daily downloads stats? Sound off in the comments below.