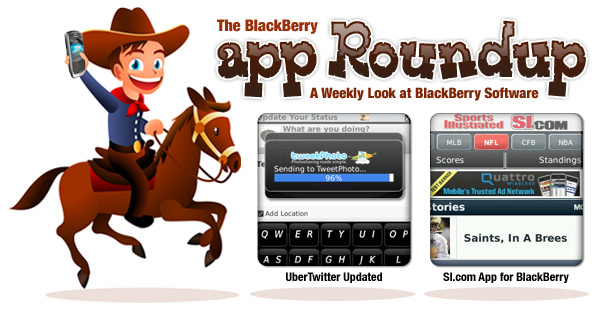 Happy mid-September everyone. As per usual, lots of good stuff in BlackBerry Software to check out this week. Getting right down to it, I've got the following apps covered in this weeks' edition of the roundup:

In Case You Missed It: UberTwitter Teams up with TweetPhoto, MyCart Updated to Version 2.3, Sports Illustrated for BlackBerry, BBScanner Updated, ScoreMobile Updated

Freebie of the Week: SmartBBattery

In Case You Missed It...

Just in case you missed these titles, below are some apps that were covered in the CrackBerry Blogs this past week. Check 'em out!

If you love to Twitter, chances are you've heard of or used UberTwitter at some point in your travels. It's a great little app that makes Twittering from your Berry a really easy task. The development team over there has recently teamed up with TweetPhoto to help ease the picture posting process. Cool beans. So, now you can post videos (thanks to an agreement with TwitVid) and photos, thanks to this new partnership. Long live UberTwitter!

For more details or to download, hit up UberTwitter.

Need help remembering things while out shopping? Enter the increasingly popular MyCart! The app makes it easy to remember almost anything while on the go. It's available in both a free and pro version, and both have been updated to 2.3. Many performance and UI enhancements have been built-in to this latest build.

Key features of MyCart include:

For all the details hit 'em up in our store.

Sports fans rejoice, SI is now available on your Berry! Earlier this week the new (and free) app arrived in App World via the developers at Polar Mobile. As you'd expect, it delivers news, stats, scores, pictures and more all right to your Berry. There's also a few cool built-in features including Twitter and more.

Check out all the details over at BlackBerry App World.

Now available for $2.99 in our store (sorry, the free beta period is over!), BBScanner has been updated to version 1.4.0.2. If you like to listen in to scanners all over the country, this is the app for you. Tune in to over 1,200 scanners, select your favorites, listen to the current top 20, and much more. There's even an option to find scanners near your current location. Fun. This latest version includes a few new features and a re-jigged interface.

More details over at BBScanner.

No, the Sports Illustrated app isn't the only sporting title making headlines this week. ScoreMobile has been updated as well, which means if you choose to update, you'll get some new features... such as:

Read more over at The Score.

Similar to the popular Guitar Hero and Rock Band series, BerryRythm is a new musical game to get your foot a-tappin'. All you've got to do is tap, tap, tap your way through the game, keeping the beat and multiplying your scores as you go. Not much explanation needed here, you know what I'm talking about, right?

Want to keep track of your BMI? (Body Mass Index) With the Body Mass Index Tracker, all you have to do is enter your height and weight, and the app does the rest. It will give you your four BMI ranges from underweight to obese. This is handy if you want to get yourself back into the normal 'healthy' range... it'll even tell you how many pounds you should lose to reach that optimal BMI.

Check out the Body Mass Index Tracker in our store.

If this one isn't ominous, I'm not sure what is... From Sigma3 Inernational, the Mayan Doomsday Countdown is just exactly that... A countdown timer to 'Doomsday' according to the Mayan Doomsday Prophecy... Which, interestingly enough happens to fall on December 21st, 2012. Not far away. Kind of a fun little app, I'll categorize it as 'different' at the very least.

You can pick up the Mayan Doomsday Countdown in our store for $1.99.

Need to know where incoming calls are coming at you from? With ReverseLookup, you can know just that, in seconds. Whenever you receive a call, ReverseLookup will launch and let you know where the number is located. It's simple, easy to use, and will certainly come in handy if you receive a lot of telemarketers or random/wrong numbers throughout the day.

Best of all, this one won't break the budget. You can pick up ReverseLookup for $1.00.

Wild West Hangman combines the original pen and paper game, with modern trivia questions, to make a game that is both fun and challenging for all ages.
On sale for $1.99
until September 30th

Set the vibration alert and the ringtone at the same time when a call is received.
On sale for $0.99
until September 23rd

Turn your BlackBerry into a highly effecient LED flashlight!
On sale for $0.99
until September 30th

NetworkAcc is a powerful mobile network accelerator specially designed for BlackBerry.
On sale for $7.99
until September 30th

Well, we all knew it was coming, and sure enough, here it is. Research in Motion has launched U2's Mobile Album, and it's available for free via App World. If you're a U2 fan, this is a must have. The new mobile album contains songs from the 'No Line on the Horizon' album with images, lyrics, interviews, videos and more. Get your hands on the latest news feeds, exclusive images, see 'who's listening' around the world, and a whole lot more. There's actually quite a bit to explore in this one. The U2 Mobile Album app is compatible with all current Berry models, including the Curve 8520, Curve 8900, Tour 9630, Storm 9500 and Bold 9000.

For all the details, screenshots and more, hit up App World.

Freebie of the Week:

New from the developers at QuiteSimple, SmartBBattery shows your battery status as an app icon on your home screen. Not much more to it than that, real simple! It's compatible with all current Berry models, but do let us know if you encounter any issues. To start it up, simply enter the app and then hit the back button. To turn it off, enter the app again and select the menu option for exit. Super easy, and super free.