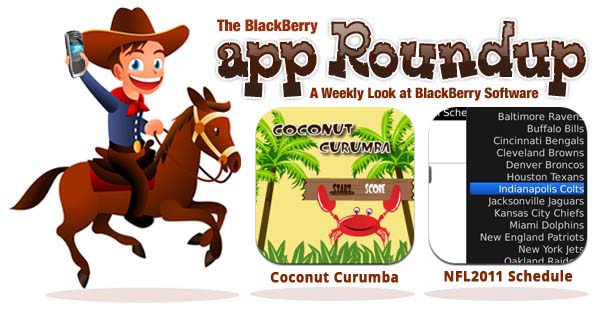 Welcome to this week's BlackBerry App Roundup! We have searched high and low and found some neat apps to share with you this week, so head on past the break to check them out! If you have an app you want to see featured in the roundup be sure to check the end of the post for information on submitting it to us.

NFL2011 Schedule by Toysoft Development Inc
Are you a America football fanatic? Are you ready for the 2011 reason? Do you have your team schedule on your BlackBerry? No? Then get this application and export any of the 32 teams to the Calendar application and never miss a game. This app will create a new entry in the Calendar for the week the team plays. If you like to set a reminder then you can easily edit the calendar entry and set the alarm. When the calendar appointment is created the subject will contain the Team names and TV station. The location will contain the stadium name. You can pick this handy app up for just $.99.
More information/screenshots and to purchase NFL2011 Schedule

Gems Catcher by MMMOOO
Use the lever and claw to grab the gems, but avoid the rocks. Try to catch the more valuable diamonds and gems to reach your target goal before the time runs out! Available for most BlackBerry smartphones, you can catch Gems Catcher for $2.99 in the CrackBerry store.
More information/screenshots and to purchase Gems Catcher

Coconut Curumba by Ajani InfoTech
Test your concentration and skill by guessing which coconut is hiding the stone! Cute graphics and fun gameplay is suitable for all ages. Compatible with all BlackBerry smartphones on OS 4.2 and higher, you can grab this FREE game in BlackBerry App World.
More information/screenshots and to download Coconut Curumba

Sleep Ringer by SleepRinger
Sleep Ringer lets you choose only certain people whose incoming call or SMS will RING even if your phone is set to SILENT or VIBRATE. Its functions are fully customizable so that you can pick and choose ringer type and SMS feature. It can be used with either silent or vibrate mode. You can use the app either at nighttime while sleeping or during the day at times when you don’t want to be disturbed. Sleep Ringer is available for $1.99 in BlackBerry App World.
More information/screenshots and to purchase Sleep Ringer

LodeRunner by 001 Leader
Your mission: collect all the gold but don't get caught! Work your way through 150 levels, digging holes to trap the enemy and take his gold. Developed for all BlackBerry smartphones, you can pick up LodeRunner for $2.99 in BlackBerry App World.
More information and to purchase LodeRunner

The Toronto International Film Festival app for BlackBerry updated with BBM integration
It's September again already, and that means it's time for the Toronto International Film Festival! Research In Motion is a huge supporter of the annual festival, and in addition to the awesome BlackBerry application brought out last year, an app for the BlackBerry PlayBook has now been added. Both versions allow you access to film descriptions and trailers, schedules, and a festival map that's integrated with BlackBerry Maps, as well as a news and networking section that helps you keep up to date on all the latest updates via Twitter, Facebook, and press releases. The BlackBerry app also has BBM integration so when you attend the films you can automatically update your status to share it with your friends.

Even if you don't plan on attending the tiff, the apps are a fun way to explore the festival. Combining smooth graphics with an easy-to-navigate interface, you can get all the details while in Toronto or on your couch. Available for devices from the BlackBerry 8500 to 9900 and the PlayBook, you can download the tiff app free in BlackBerry App World from the link below.
More information and download the tiff app for your BlackBerry smartphone or PlayBook

Well there you have it folks! Be sure to check out New BlackBerry Apps, Updated BlackBerry Apps and Free BlackBerry Apps available at ShopCrackBerry.com. If you are a developer and want to have your app shown in the roundup or you're interested in having us host a contest for you, drop me an email at cbmichelle[@]crackberry.com. See you all next week!