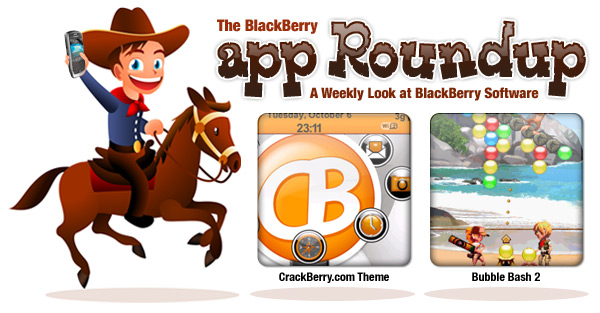 Brrrrrr it's getting cold up here in Canada. While Kevin is down in San Diego for CTIA, I'm stuck here whipping up this week's roundup :) (be sure to follow Kevin on Twitter @crackberrykevin) Really though it's not so bad, I enjoy it... So let's get right down to it! Covered in this week's roundup are the following titles:

Freebie of the Week: CrackBerry Theme for BlackBerry!

In Case You Missed It...

Just in case you missed these titles, below are some apps that were covered in the CrackBerry Blogs this past week. Check 'em out!

I couldn't go this week without mentioning the new Tie Master app Bla1ze told us about earlier in the week. I've always had issues tying a proper knot, and most of the time, I'll leave a tie tied up for use again. Kinda lazy I know, but it's worked for me... until now. Why? Know thanks to Tie Master, I can pop open this nifty little app and it will show me step-by-step how to tie my tie. In all there are 5 different knots you can go through, and each has 6 easy steps.

Vonage Mobile for BlackBerry is now available. It allows you to make pretty darn low-cost international calls using the Vonage service. Using it is amazingly easy. Install the app, and from then on, whenever you dial a long-distance number, it will call through the Vonage service. Excellent. You can pay for your calls via a pay-as-you-go plan, so simply top up your account when the funds are getting a bit low.

Pick up all the details at VonageMobile.com.

If you're a developer and haven't checked this out yet... what's wrong with you!? :P RIM has released a new SDK for developers called the BlackBerry Widget SDK 1.0 Beta 1. With OS 5.0 coming soon, we're on the cusp of widget integration. Developers best get on this right away. Some great description from the official press release:

Using the new BlackBerry Widget APIs, developers can, for example, create seamless interaction between a widget and the BlackBerry email and calendar applications, create widgets with the ability to view or edit files and documents stored on the smartphone, access location-based services or the media player, and more. Developers can also take advantage of RIM's unique push technology, enabling dynamic widgets that can run in the background and provide proactive alerts to users in a timely manner.

"BlackBerry Widgets open up a world of opportunities for developers to build and bring to market web applications for BlackBerry smartphones that offer advanced, integrated functionality and an always-on user experience," said Alan Brenner, senior vice president, BlackBerry platforms at RIM. "We are very excited by the prospects of this new widget development platform which combines the ease of development of standard web languages with the rich functionality of Java development."

Developers, head over to the widget SDK page right now for more information.

If you're wanting to check out one of the better (if not the best) browsing experiences available for the BlackBerry, BOLT has released an official version of their browser. It's out of Beta, and 1.5 is available for download.

BOLT has had over 2 million downloads across 190 countries so far. Give it a spin for yourself at http://www.boltbrowser.com/

The Facebook mobile site has received a bit of an overhaul. If you haven't checked it out yet, head oer to x.facebook.com from your Berry's browser. That's right, x, not m! The x subdomain is apparently optimized for smartphone users, so give it a looksee to see if you likey.

e-GPS is the app for you if you've ever lost your Berry... or had it stolen. It allows you to remotely send a command to your phone that has it email the exact GPS location of the device. It can also send to you all of your address book info, or even use it to wipe the device and SD card. One handy feature that I could see myself using is the alert feature. If you've misplaced your BlackBerry in your home or office, you can send an alert command to it to have it ring, no matter the current profile setting. This one works just dandy with the Pearl, Curve, Bold, Storm and Tour series.

The AnswersLite app gives you answers to all of your questions. How? It ties into Yahoo! Answers to find them. Punch in your question and all will be revealed. It's easy and quick to use, and, oh yeah... it's free!

Note: I know this is a freebie, but I wanted to mention it here as I have a really special freebie for you all way down at the bottom of the roundup. Keep reading to check it out!

Gator Nation Theme for the Storm

Florida Gator students, fans and alums will enjoy this new theme. Titled Gator Nation, it brings the look and feel of the Florida Gators right to you BlackBerry device. Custom backgrounds, icons, fonts and more are included... and it should work just lovely on any BlackBerry Storm

Need a 'safe house' to securely store sensitive information? SBSH SafeWallet is just that. Use it to store information such as credit card details, passwords, bank account info, PIN numbers, serial numbers, and the list goes on and on... The app uses 256 bit AES encryption, the same level of encryption the US government puts into play. There's tons of features and settings to check out on this one, so head on over to our store for more details.

Note: A free trial is available.

Experience the most addicting game--based on Drug Wars.
On sale for $2.99
until October 11th

Have you ever lost track of a that really important email in your inbox? This utility will add a new menu item in the email application which will let you toggle on or off a flag on any email or PIN.
On sale for $0.99
until October 11th

Send SMS/text messages beyond the restriction of 140/160 characters set by carriers.
On sale for $1.49
until October 31st

The original, best-selling mobile finance application now updated for BlackBerry! Record transactions for multiple accounts while on the go. Supports QIF, XLS and HTML exports.
On sale for $7.99
until October 31st

Suppose I'm mentioning this game because one of my all-time favorite puzzle/strategy games is the classic 'Bust-a-Move' title. Remember that one? Bubble Bash 2 follows is basically the same idea. If you're into classic games at all, this one will certainly take you back, albeit with different characters and a new look. It's a little expensive (in my opinion) at $4.99, but if you loved the original, chances are you'll waste more than a few hours popping bubbles while at home and at the office :P

Freebie of the Week:

Yep, that's right, now there's a CrackBerry.com theme available right now for your Berry... and it's FREE! The good folks at WJD Designs, AHazDesigns and JMal Designs teamed up on this one, and it's available for the Tour 9630, Bold 9000, Storm 95xx, Curve 8900, and the 83xx 87xx and 88xx series. Awesome!

To download your copy for free, hit up our store >