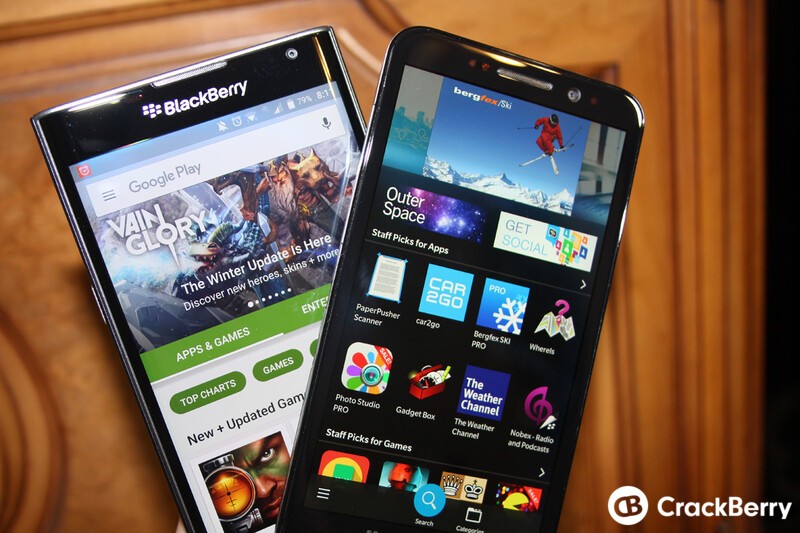 Howdy CrackBerry nation! Another week has passed so you know what that means? Not only is it time to share with you another batch of applications for your BlackBerry 10 or Priv smartphone, but it's also time to catch up on all the news that transpired since we last met.

The major announcement this week was the Priv hitting shelves at T-Mobile — both the literal shelves and the online ones. We also saw BlackBerry announce their new Good Secure EMM Suites, which is a new set of applications to better manage enterprise devices. Finally, if you've been meaning to pick up a BlackBerry Priv or a BlackBerry Passport, ShopBlackBerry is offering a special promotion from now until February 24th where customers can enjoy discounts on both devices as well as a free accessory bundle.

Now it's time to bring you this week's picks for all you passionate BlackBerry addicts out there. You can find each app and game I've rustled up for you by clicking through the gallery below. If your favorite didn't make the cut this week, remember you can help by offering your suggestions at the end.

SunCalc is an advanced and native sun tracking tool that provides important solar information. Whether you are a photographer searching for the perfect light, a vacationer planning a trip, or someone who enjoys astronomy, SunCalc displays data pertaining to that bright ball of fire in the sky in an easy-to-read manner. Not only can you track the sun's position in the sky, but you'll also get exact times for events like sunrise and sunset, be able to calculate the direction of shadows, obtain important astronomical information of the Sun, and view the 14-day weather forecast.

This app provides a comprehensive suite of tools to accomplish this task. SunCalc generates graphs that show the sun's path through the sky in any given location on any given day, shows exact times for all events including day and night length and twilight. It even gets very specific for the solar enthusiast, offering an altitude limit for monitoring when the sun reaches that level and how long it stays above it, and displays a real-time calculation of astronomical data as well as an interactive graph for the entire year.

SunCalc is a handy Built-for-BlackBerry app you can purchase it for $1.99.

Color Me by Michael Neuhold

Coloring is a beneficial activity for reducing stress and expressing creativity. When it comes to adult coloring books, this growing trend has been making its way across various platforms and media. Color Me brings the coloring books to BlackBerry 10, offering six different categories with each one containing five images. The first design of each category is free for you to color, however, an in-app purchase is required to access the remaining four in the pack. These patterns include animals, flowers, and exotic.

Color Me is an easy-to-use native app. All you have to do is use the color picker at the bottom to select a color and a particular hue and tap on the screen to color in a particular area. It also comes with a pinch-to-zoom feature to color in more intricate designs.

You can download this native application for free in BlackBerry World.

This classic game has gone through many iterations on various systems since its inception under the name of Breakout. From Arkanoid to Alleyway the allure of smashing bricks with nothing but a paddle has always provided hours of fun. For example, BlackBerry pre-loaded a version on their BBOS handsets. We all love this game so why not try one with a bit of a twist. And now, for Android, there is Brick Breaker Hero.

In this version, the game itself is more colorful, more animated, and sometimes easier than its predecessors. You still launch a ball to smash bricks, but in Brick Breaker Hero there is the context of a story. Your character uses the paddle and ball to attack monsters, engage in boss battles, and cast magic spells all to free the villagers. There are power-ups such as bombs, fire, or a lightning ball that your character casts to help him in his quest. Some of these are earned during gameplay, others can be obtained by viewing ads or through in-app purchases.

Brick Breaker Hero has over 150 levels, unique kingdoms with their own themes and adventures, and easy controls. All you have to do is place your finger below the paddle, where indicated, and swipe to either side of the screen.

It is also similar to other games we've seen, such as Angry Birds and Candy Crush, in that you try to achieve three stars on each level and are limited to set number of lives that are refilled over time.

You can download Brick Breaker Hero in Google Play for free.

One of the features I used for taking photos on my BlackBerry 10 camera was Time Shift. It provided a convenient way to capture the best possible shot of your subject. It accomplished this by capturing images before and after your shot so you could choose the best looking frame (i.e. if a friend blinked).

Now that Im rocking a BlackBerry Priv, I wanted something comparable. Camera MX is one such app which offers a similar feature which they call "Shoot the Past" feature. It works like Time Shift, in that it captures images three seconds before an image is taken. Using the circular icon, you can slide it back and forth and choose the ideal shot to save. Quick and simple it gets the job done. However, unlike BlackBerry 10, it will not detect faces.

Camera MX is also an impressive all-round camera editing application for creating high-quality photos and videos. It offers an assortment of photo editing and video options, which can be previewed in real-time, a simple user interface, live shot capabilities for capturing moving photos, scene modes, support for 16:9 aspect ratios, and its own media manager.

You can download Camera MX in Google Play for free.

Looking for a game that is entertaining and exercises the noggin? NUM: The Logical Game takes the classic game and brings it to your BlackBerry 10 device. The object of the game is to clear the field by striking out pairs of numbers or chips. You can strike off pairs as they appear on the board or through line breaks, either vertically or horizontally. If you start to run out of moves, you can hit the transpose button to extend the playing field.

NUM comes with two different game modes, classic and random, which you can choose to play as chips or numbers. Each one presents their own level of difficulty though the developer states it is possible to get an unsolvable puzzle in random mode.

While simple, you do have to actually sit and think about your moves before you start selecting pairs. It can and will affect the game later one. This is especially true once you start adding rows.

You can purchase this native game in BlackBerry World for $0.99.

Read Out! by Sven Ziegler IT Solutions

After a brief hiatus due to some technical issues issues, this week saw the return of Read Out in BlackBerry World. As the name implies, it essentially translates text into speech and will read your messages out loud to you. Whether it's an email, text messages, BBM, or another application that supports sharing of text, Read Out! will automatically detect the language and convert into an mp3 audio file. Now that the issues are resolved, you can find the latest version (v2.4) in BlackBerry World.

You can purchase this text-to-speech application for $0.99.

That's it for this week folks. For more apps and games, be sure to head on over to the CrackBerry Forums where you will find even more hidden gems to choose from whether it be for BlackBerry 10, BBOS, the BlackBerry PlayBook, or even Android Apps in the Google Play store for the BlackBerry Priv. Of course, you can always find the latest and greatest top editor's picks in the CrackBerry App Gallery. Are there any apps or games you would like to see? Feel free to leave your suggestions in the comments.