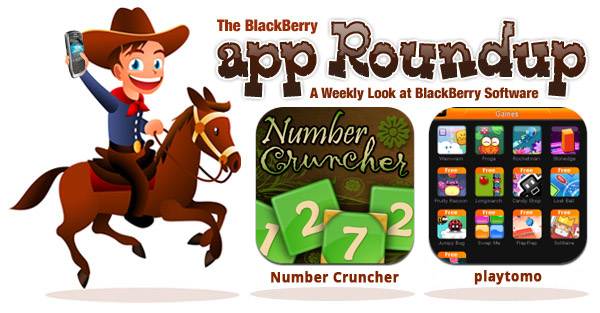 Welcome to this week's BlackBerry App Roundup! This week we decided to focus on games, and not just any games, but FREE games! Check them out after the break. If you have an app you want to see featured in the roundup be sure to check the end of the post for information on submitting it to us. We have several contests going on this week, so be to check them out and enter to win some cool stuff here.

Deal or No Deal by Vimukti Technologies

Test your luck with Deal or No Deal on your BlackBerry by Vimukti Technologies. If you've seen the popular game show on tv then you already know how to play. If not, it's pretty easy. You are presented with 26 briefcases and allowed to choose one. Each briefcase contains a dollar amount from $.01 to $1,000,000, and your goal is to end up with the most amount of money. In each round you eliminate briefcases, and the dollar amount they hold is revealed. At the end of each round the "banker" makes you an offer on your briefcase; you either accept the offer and take the money he gives you, then opening your case to see if you made a wise deal or not, or you continue playing, hoping your chosen case has the million dollars. There is a free (ad supported) and a paid version (on sale for $3.99, regularly $4.99) of Deal or No Deal, compatible with a variety of BlackBerry smartphones.
For more information/screenshots and to download Deal or No Deal Free
For more information/screenshots and to purchase Deal or No Deal

This cute game is actually a real brain teaser! You are a little octopus, and your goal is to get to the treasure chest. You only have a certain number of moves, and you have to collect fish, keys, and other objects on your way to the chest. Sounds easy, but it takes some real thinking to get to the goal. I learned that playing on the Torch sometimes you have to use the trackpad AND the touchscreen to get your octopus where it needs to go. Octopuzzle is FREE in BlackBerry App World and compatible with multiple BlackBerry smartphones.
For more information/screenshots and to download Octopuzzle

Playtomo is a collection of minigames for your BlackBerry. Download Playtomo and you instantly have access to a ton of games, with new ones added each month. All types of games are included, from Sodoku to word, action and puzzle games. You can connect to Facebook and play against your friends too! It's ad supported, which keeps it free for you, and the ads are unobtrusive. Playtomo is compatible with most BlackBerry devices, though there are some carrier and country restrictions.
For more information and to download Playtomo

Boa is a snake game in which the objective is to guide a snake to eat as
many animals and cheeseburgers as possible while avoiding the walls of the
map. Watch out for spiders and drills, but try to collect different colored vials along the way to help you out. Levels are randomly generated and there are no limits, so you could play this game forever!  The game supports any resolution from 240x320 and is completely FREE.
For more information and to download Boa

Number Cruncher is kind of like a cross between Sodoku and Tetris, the objective being to generate as many sequences of numbers as possible in an allotted time. As numbers are successfully sequenced they are removed from the grid and new numbers fall into place. The higher the number of tiles in your sequence, the higher your score will climb. Number Cruncher is compatible with all BlackBerry devices, but does have a few country restrictions. You can grab it FREE in BlackBerry App World!
For more information/screenshots and to download Number Cruncher

Do you like to drive tanks over rugged terrain, lob artillery shells into the far hills, and blow up lethal opponents lurking around every bend? If so, then Tank Ace 1944 is the game for you. The goal of each round of play is to clear the enemy from a map sector and drive them off the far bank of a river so that your side can cross and advance. A status panel shows the number of enemies left, rounds remaining, fuel, and armor strength. The last three can be replenished by ramming (not shooting) an enemy truck. If you run out of fuel or armor, or for some reason drive your tank into the water, in addition to an untimely death you will be forced to retreat one sector. If you wipe out the enemies you will advance one sector, retaining any excess supplies you have scavenged. The game ends when you take the enemy capitol, or they overrun yours. The lite version of Tank Ace 1944 is FREE, and there is a paid version as well that will run you $4.99.
For more information and to download Tank Ace 1944 Lite
For more information and to purchase Tank Ace 1944

Well there you have it folks! Be sure to check out New BlackBerry Apps, Updated BlackBerry Apps and Free BlackBerry Apps available at ShopCrackBerry.com. If you are a developer and want to have your app shown in the roundup or you're interested in having us host a contest for you, drop me an email at cbmichelle[@]crackberry.com. See you all next week!