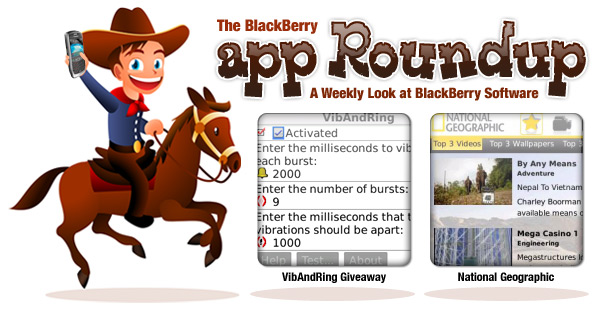 Howdy folks. Hope you've had a very productive week. As per usual, this weeks' App Roundup is chalked-full of goodness. Lots of great stuff to talk about, plus we're giving away 25 copies of VibAndRing. Covered this week in the BlackBerry App Roundup are the following titles:

Giveaway of the Week: VibAndRing

Freebies of the Week: National Geographic for BlackBerry, SmartAlarm, Tungle

Giveaway of the Week:

VibAndRing is a simple app that lets you set the vibration and ringtone alerts to go off at the same time. Many nice little options are built-in, including the ability to set the amount of vibrations, the length of them, and even the pause between them! If you've ever missed a call because your ringtone didn't play until the vibration cycle finished... VibAndRing is your solution.

If you'd like to enter for your chance to win one of 25 free copies of VibAndRing, answer the following question in the comments:

How many extra calls will you answer per month, thanks to VibAndRing?

Leave your answer in the comments now... Good luck!

Freebies of the Week:

National Geographic is one of those TV programs that the entire family can watch and enjoy... and now you can also watch on your BlackBerry. Whether you are travelling or lounging by the pool you can enjoy the wonders of the world that National Geographic has to offer. Download wallpapers, ringtones and clips from some of the best shows, as well as a complete TV schedule so that you will not miss any of your favorite shows. National Geographic movies are often spell binding as they cover many of natures spectacular animals and their antics as they go about their daily life of surviving in the wild.

Get the National Geographic app today in App World >

Now here is an ingenious application that many will appreciate. SmartAlarm learns your sleep cycles and them wakes you up when you are in the lightest sleep phase. In case you are wondering, if you wake up during a deep sleep phase, it will take you a few hours to recover from waking up. Waking up from a light sleep cycle is always the best approach. The app will work properly if you place your BlackBerry close to your pillow so that it can sense and learn your sleep cycles. Once it has learned these cycles it will wake you up at the proper time. The SmartAlarm app works on the Storm series only, runnong OS 4.7 and up.

Try out the Free Beta version of Smart Alarm today!

The Tungle app has been in Beta for some time; however it is now being made available to the public for free. Users can download it from the Tungle website and use it to schedule meetings, share calendars and reply to invites. Scheduling meetings is a snap, propose times, send invites, check pending meetings and even overlay calendars. If you decide to share calendars, you can choose between status indicators for free/busy or provide details about your status. Users can also reply to invites and there are many other options that exist that make it easy to use Tungle and organize your life.

Get your free copy of Tungle from their web site >

In Case You Missed It:

Xobni is a great address book app that was launched in March of this year and has been recently upgraded to fix a number of issues that users identified. You will want to get the latest release (1.0.58.1) if you're already a user. New features include the ability to hide addresses in your contact list, merge addresses when you have multiple contacts, and more. Keep track of all of your most important contacts on your BlackBerry with the latest release of Xobni!

Get the latest release here >

For regular users of Tvider, version 2.1 has been released to replace the free version of 2.0 with a number of new features. Version 2.1 comes at a price of $2.99. With it you can tweet plain text, reply to tweets using text or multimedia, retweet friend’s tweets, search for Twitter users and tweet prerecorded multimedia from your phone or your SD card. Other features include managing direct messages, follow other Twitter users including blocking them and unblocking them. You can view another Twitter user’s profile as well. With all these features available for the update to Tvider, the update to 2.1 is one you may want to consider.

If you were previously frustrated because the free Ticketmaster app was not available for your BlackBerry... kiss your frustrations goodbye. The latest edition of the app includes support for all devices and carriers! Existing users will already know some of the advantages of Ticketmaster... Browse ticket information for concerts, sporting events, special events and look at the seating information and then make your purchase. The best part? It's a free download from BlackBerry App World.

Check out Ticketmaster in App World >

Tired of all of those spam calls from telemarketers and salespeople? With Call Control, you can choose which calls to block right on your phone and avoid the interruptions. Manually blacklist numbers that you do not want calls from... and there's also a preset list of numbers generated from user reports. If a particular number keeps hounding you, submit a report and other users will benefit! Very handy.

Get your copy here in App World >

If you are an avid runner, or perhaps you like to go on long bike trips, the Alpha Runner app may be ideal for you. Keep track of your time, your speed as well as the distance and the calories you are burning as you go on your run. Use your BlackBerry to help keep tabs of your training regimen with the aid of accurate GPS tracking. Track your average stride, calories burned, distance traveled and more! Alpha Runner requires a GPS enabled Berry on OS 4.7+.

LockPlus prevents accidental calls from being made. Settings allow you to set your Berry to 'lock down' after as little as 15 seconds... and to unlock, all you have to do is click and hold one key! Multiple features and settings are built-in, making it truly customizable to your needs. The app starts automatically when you turn on your phone and also runs quietly in the background. LockPlus will work on all current BlackBerry devices on OS 4.1+.

Check out LockPlus in our store >

All of us are looking for the slightest edge to help win one of the big lotteries... if you're Canadian like me, there's a new 6/49 app to help you pick out 'hot' numbers. With a colored user interface you will have no problem picking out those numbers for the next drawing. The Lotto Canada 649 should run just fine on BlackBerry devices 83xx and above with OS 4.2, 4.3, 4.5, 4.6.

Get your copy of the Lotto Canada 649 app today >

The official Twitter for BlackBerry app has been out for a little while now, and if you haven't checked it out yet, you might as well! You can download it for free, and see how it compares to UberTwitter, Tvider, or any of the other excellent Twitter clients we're used to using. This official app works nicely with your Berry's camera to upload pictures to your Twitter feed. So far it's rating, well, let's say 'not so bad' in App World, so give it a spin for yourself to see what you think.

Get your free copy of the app Twitter for BlackBerry >