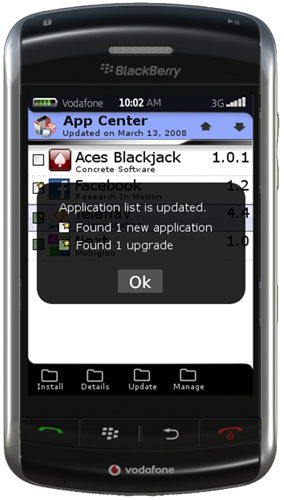 It really wasn't that long ago that RIM was hiding the BlackBerry App Center under a shroud of secrecy. Details were slim, facts were not clear and everyone was left wondering what exactly was going on. Well, the shroud of secrecy didn't last that long and RIM began explaining exactly what the application center was to be. We all know carriers love to push certain items to our devices, some are useful some are better off having never been pushed considering it's nothing more than carrier advertising. We all see it, until we hide the icons and forget about them till a later time.

BlackBerry application center was created to clean this up and give users the option of which "carrier related" items they wished to install on their devices as well serve as a repository for carrier approved applications. So..where is it? We have seen it on the Storm and more recently we know for a fact it is still being built into OS' considering all 5.0 leaks have it held in the install files.

It leaves the question will application center be used at some point in time further down the road more widely? A lot of developers ask questions about BlackBerry app world and why not all carriers are having it proloaded and RIM's response to that is that they are indeed working alongside carriers to make that happen, but all are not on board with the idea yet. But if application center was designed for this why does it remain unused? Do you want it or feel it's even needed? Sound off your thoughts in the comments.