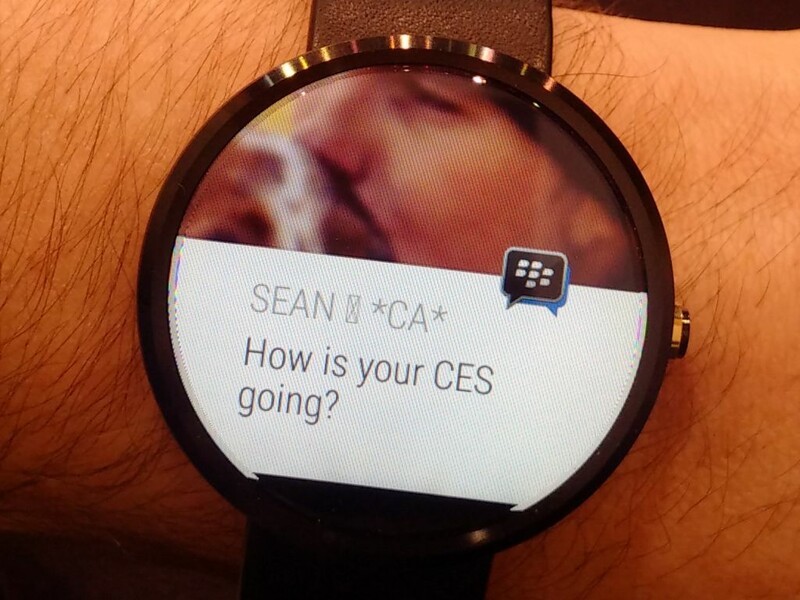 BlackBerry has announced as part of its CES 2015 press event that its BBM messaging service is coming as an app for Android Wear devices. The company said it would be released "soon" but a specific date was not revealed.

Without touching your phone you can:

According to research firm Canalys(1), annual smartwatch shipments are estimated to grow to more than 28 million units by 2015 and more than 60 million by 2017. BBM's large and engaged user base spends more than nine hours a week within the BBM application. Through Android smartwatches, this active BBM community will be able to access their BBM messages directly on their smartwatch without the need to reach for their smartphone.

"BlackBerry is committed to listening to our customers and integrating new features and partners to improve the BBM Chat experience," said Herman Li, Senior Vice President, BBM Engineering and Product Management, BlackBerry. "The integration of BBM to support wearable technology is just one way we're expanding the capabilities of our portfolio and delivering exciting options for customers to easily access BlackBerry's cross-platform technologies."

BBM for Android Wear will enable BBM users to seamlessly:

BBM support for Google Android Wear Platform will be available in early 2015.

A global leader in mobile communications, BlackBerry(R) revolutionized the mobile industry when it was introduced in 1999. Today, BlackBerry aims to inspire the success of our millions of customers around the world by continuously pushing the boundaries of mobile experiences. Founded in 1984 and based in Waterloo, Ontario, BlackBerry operates offices in North America, Europe, Middle East and Africa, Asia Pacific and Latin America. The Company trades under the ticker symbols "BB" on the Toronto Stock Exchange and "BBRY" on the NASDAQ. For more information, visit www.BlackBerry.com.

Introduced in 2005, BBM set the standard for mobile instant messaging and continues to drive innovation in messaging and private social networking. Today, BBM is one of the largest private social mobile networks, driving real, active conversations. Customers love BBM for its privacy, controls and immediacy with Delivered and Read statuses and message-in-progress notices.