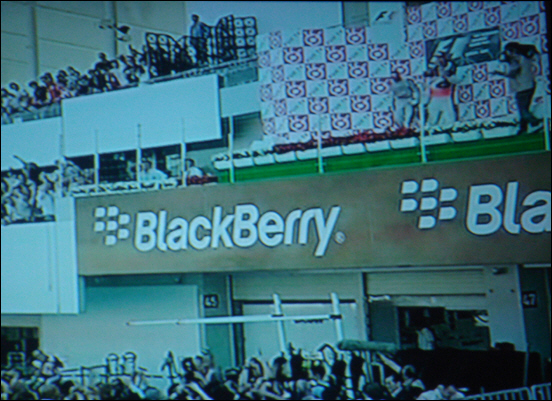 You can correct me if I'm wrong in the comments, but I'm pretty sure this is the first time I've ever seen BlackBerry advertising show up at a Formula 1 Grand Prix... The season may be winding down with only two races left to go (Brazil, Abu Dhabi), but this weekend at the Suzuka race track for the Japanese Grand Prix the BlackBerry billboard was hung proudly in pit row, strategically placed right below the podium.

Formula 1 doesn't have that big of a following in North America (though there are definitely some hardcore fans there), but on a worldwide stage is the biggest racing series there is. Whether this is a one-off just to get some additional advertising exposure for BlackBerry in Japan or is the beginning of a larger F1 campaign, I'm not sure, but personally would love to see more of BlackBerry in the sport. Telecommunications carriers  are no strangers to F1 and BlackBerry has received some benefit from that before -- remember Lewis Hamilton driving his Vodafone McLaren Mercedes F1 car remotely from a BlackBerry Storm -- but actual advertising or even sponsorship of a team would take it to the next level.

Hmm... now that's a good question... If RIM were to sponsor a Formula 1 team, which team should they sponsor? Ferrari (see this post)? Red Bull? McLaren? Brawn GP?? Toss your opinion in the comments!