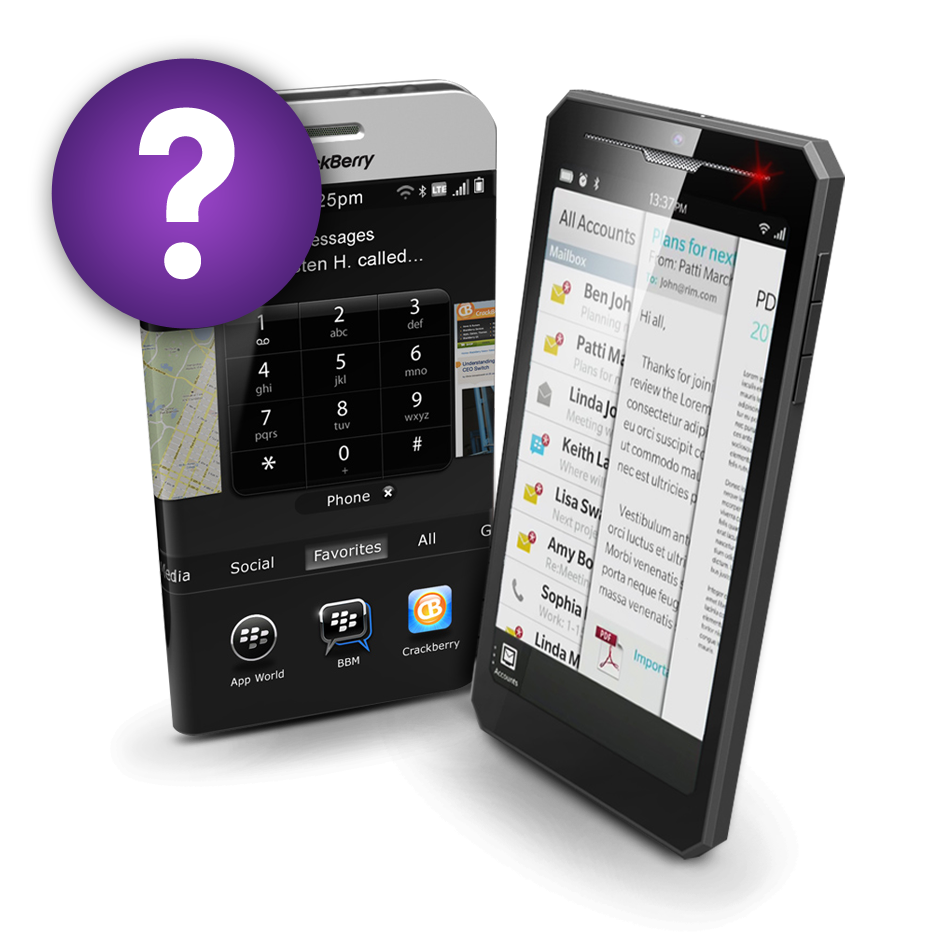 The BlackBerry A10 is a rumored device said to be arriving later in 2013. Previously known by its codename, Aristo, the A10 will most likely be released as the BlackBerry Z30 - a full touchscreen device that will be the successor to the popular BlackBerry Z10. The A10 is said to feature a 1.5GHz quad-core Qualcomm processor and a 5" Super AMOLED display, making it the largest display on a BlackBerry phone to date.

While nothing has been confirmed, it is rumored that Sprint will be releasing the BlackBerry A10 as early as November of 2013, though we can assume it will be widely available at launch.

The Top 5 BlackBerry Leaks That Were Never Released As Actual Products!

In taking a look back at all of the BlackBerry leaks that have happened over the years, we started to wonder how many of them were device leaks that never ended up going to market. Many were just prototypes, or never meant for the public eye but somehow managed to make their way out anyway. As it turns out, there's a few of them out there, so have a look through our list of the top 5...

Login and leave a comment for your chance to win a BlackBerry Z30!!

BlackBerry Z30 compared to Z10 and Q5 in new round of leaked photos!

Just a few days ago it was revealed that the rumored BlackBerry A10 will most likely be released as the BlackBerry Z30. A few more photos of the BlackBerry Z30 were sent into us today on the good 'ol CrackBerry tip line, this time showing off the Z30 side-by-side with the Z10 and Q5. The images don't really show us anything new but they do help to give a bit of scale when put next to...

Will the A-Series go to market as the BlackBerry A10, Z15 or something different?

BlackBerry names - it's always been a fun guessing game. With the older BlackBerry OS phones, over the years the system for naming new models became a bit of a fragmented mess - Bold, Curve, Pearl, Storm, Torch, Tour, Style became brand families and a bunch of model number designations followed the family name. Sometimes the name and model number progression made "sense." Sometimes,...

Just in case the hands-on video wasn't enough for you, Tinhte has also taken plenty of pics of the BlackBerry A10 as well for us all to drool over. Front, back, sides, we get the whole kit and kaboodle with this one. I'm already sold on the BlackBerry A10 so no need to convince me but you all can sound off in the comments with your thoughts, now that we're getting a better look at the...

BlackBerry A10 caught on camera once more

The BlackBerry A10 has once again been caught on camera. Twitter user @nvthanh1994 dropped a few images of a shiny new A10 earlier today and while it's nothing new, we still love to see new photos of unreleased devices. Here we get a good look at the front of the A10 as well as a not so good look at the back. What is noticeable however is that the back of the device seems to be a bit...

Over the past little while, we've seen plenty of the next BlackBerry device that will come from Waterloo otherwise known as the A10, Aristo or A-Series leak out but just in case you're looking for more, some new device parts have now appeared online and would seem to confirm a few of the rumored specs.  As you can see in the shot above, ETrade Supply has managed to get their hands on...

BlackBerry A10 rumored features and specifications

Holy A10! More and more BlackBerry A10 info is floating down the pipeline, and now a hot new slide had leaked in the CrackBerry forums that gives us a better look at just what the A10 might have in store. The slide is from back in May so take it for what it's worth, but it does give us a load of info about the upcoming A-series device nonetheless.  We've heard mixed things thus far so...

BlackBerry A10 battery door gets compared to Z10 and Q10

A few days ago while digging through a BlackBerry 10.2 OS I came across some placeholder images for the A-Series devices. They weren't anything special by any means but at the time I had speculated we'd be seeing plenty more of the device soon. Well, since then we've actually seen a lot more than even I was expecting, including the first spotting of the device and what potentially could...

Hot: 5" touchscreen BlackBerry A10 shows up in video!

Now that's a BIG BlackBerry. Watch the video above, comment below, hit up the related forum thread for more discussion and be sure to check out CrackBerry's BlackBerry A10 Topic Page for much more on this 5" touchscreen BlackBerry.

Is this the back cover of the BlackBerry A10?

All of the hot rumors are surrounding the BlackBerry A10 - the next device in line for BlackBerry 10. We've already seen a leaked image of the device and today some more images have popped up that show off what could be the A10 battery door.  While we can't say for sure that this is the back cover of the BlackBerry A10, it certainly does fit the bill. As we've heard already the back of...

Would you buy a BlackBerry A10 based on the rumored specs?

The BlackBerry A10 (aka Aristo) is the next rumored BlackBerry 10 device. It's been said to have a release date later this fall and while we don't know many details yet, we've still heard a bit about some specs that could be packed into the next flagship device from BlackBerry.  In addition to a 5" Super AMOLED display, the A10 is rumored to have 2GB RAM, an 8MP camera and a 1.5GHz quad...

The BlackBerry 9720 is the latest device to hit the rumor mill and while we saw some images pop up already, a few more have hit the web for those eager to check out the device once again. While the 9720 isn't a new BlackBerry 10 device but rather the next BlackBerry 7 phone, plenty of users in certain markets will still be anxious to get their hands on one.  BGR has posted some more...