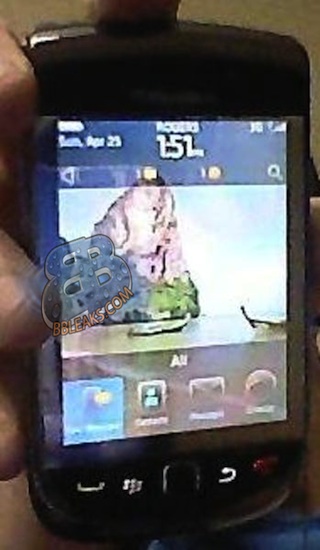 Yes, we know the photos are not the highest resolution, but they're legit and they're showing off unannounced, unreleased BlackBerry Smartphones running a not-yet available operating system, which makes them cool.

On the two left photos, you have the upcoming BlackBerry 9800 "slider" showing off BlackBerry 6. In GSM dressings, we're thinking this is the device RIM's Founder and Co-CEO Mike Lazaridis was referring to when he said we'll see BlackBerry 6 launch next quarter. We don't know a ton about the device yet specs-wise or name wise for that matter, but the prevailing notion from what we have gathered so far is that it will hit AT&T first. Though a name is just a name, I'm curious to see what RIM ends up calling this one, as it'll be the first BlackBerry Smartphone to combine a touchscreen with a physical keyboard. To date, RIM's touchscreen BlackBerry devices have fallen into the Storm family of brand, but as I learned last week from RIM's VP of Product Marketing, within the US market the Storm name (to date anyways) has been exclusively licensed by Verizon. So if it's hitting AT&T, maybe we'll see it launch as a Bold Slider or Bold 9800 - unless RIM wants to introduce yet another brand family which seems a bit counter-intuitive seeing as they just gave the axe to the Tour brand.

And on the right we have the BlackBerry 9670, showing off a clamshell form factor containing a full qwerty keyboard. Yup, it's kind of hideous, but it's rocking BlackBerry 6 and apparently a 5.0 megapixel camera, which is hottt! This one is CDMA, and we've been hearing it's a device Verizon asked RIM to build - so if you're not liking the look of this one I wouldn't toss all the blame in one spot just yet. I'm sure we'll learn more about this one in the weeks and months ahead.