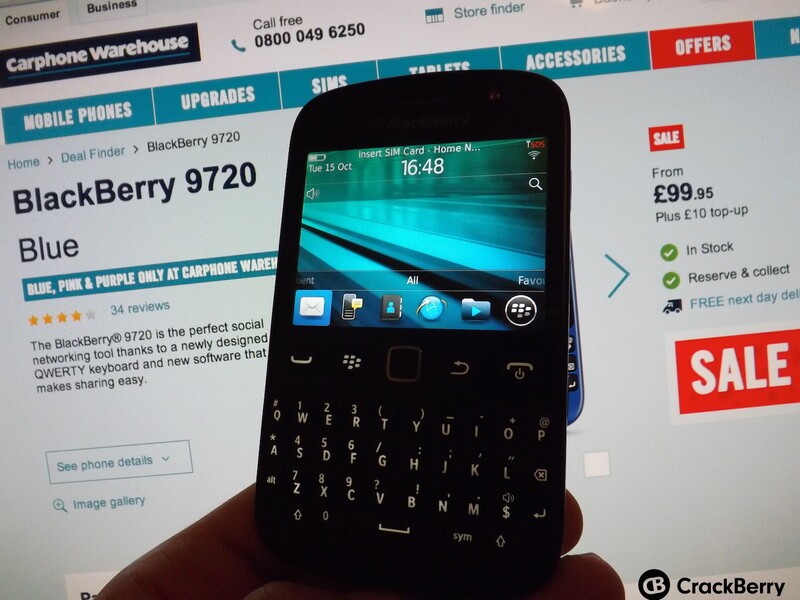 With many folk here in the UK waiting until after Christmas day for the sales to start with High Street and online retailers I thought it was worth pointing you in the direction of the price that Carphone Warehouse now has the BlackBerry 9720 up for. We published our UK PAYG price guide just recently, but things are already changing after the Boxing Day sales kicked in. Now at just £99.95 plus a £10 top-up and available in a range of colors this holds pretty good value for money in my book considering that some of the other UK networks are still offering the BlackBerry Curve 9320 at that price.

I'll admit that there isn't a massive amount of difference between the two devices. The big things that stand out for me between the 9720 and the Curve 9320 has to be the touch screen and better camera on the 9720. We also get the redesigned keyboard on the 9720 as well as the hardware buttons either side of the trackpad, although this won't be a deal breaker for many.

This is just a heads up really if you were holding off to pick up yourself or the kids a new BlackBerry on Pay As You Go. Carphone Warehouse have the 9720 available from several networks (each with their own bonus incentives) at this price and with the five color options I'm sure there is something for everyone here if you are on a budget, or just don't need the all singing and dancing BlackBerry 10. After seeing the device results in the last earnings call from BlackBerry it seems that legacy devices such as the 9720 are still selling very well.

Anyway, if you are in the UK and wanted a bargain this isn't a bad option.