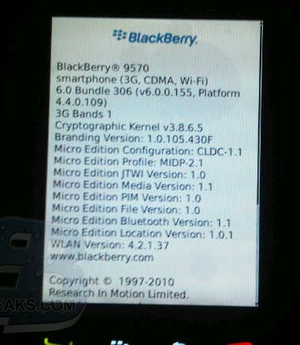 While those questions can't be answered as of yet we do know some specifics on the "BlackBerry 9570" though and that's the reasoning why for now, we'll call it a basic Storm 2 refresh until we know more. Basically, you're getting a SurePress device with 512MB of RAM, a 5MP camera and fully BlackBerry 6 capable. And of course, a presumed 624mHz processor that RIM is so fond of (although Qualcomm 528mHz are more commonly used for CDMA so that's more likely). All of which is running on CDMA and looks identical to a BlackBerry Storm 2. That's all we know for now folks but, I'm sure some more information will come out now that it's been publically shown off. How do you BlackBerry Storm 2 owners feel about this devices arrival? Would any of you non Storm owners consider buying this with the minor upgrades it has?