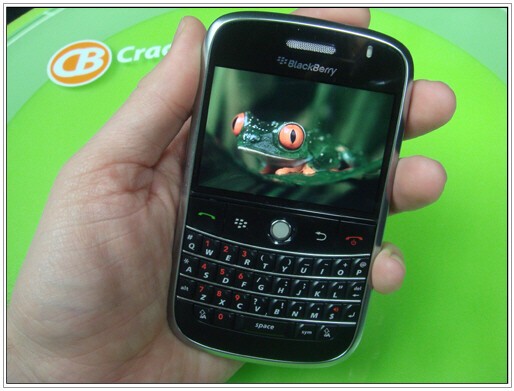 Sorry for the delays folks. Next time I get my hands on a pre-release device I’ll be sure to write Part II before putting Part I live. I’ve been inundated with emails and distractions since news of the eBay 9000’s emergence broke, and in true CrackBerry Addict fashion I try never to get too far behind on my emails (besides, it's giving me some practice on the 9000's keyboard!).

If you haven’t checked out Part I of this Hands-On BlackBerry 9000 review, I suggest taking a read through that first. In addition to lots of nice eye-candy shots and comparisons to existing BlackBerry devices on the market, it explains the story of how I ended up with a pre-release 9000 (it’s amazing what you can buy on eBay these days!). And while I was originally planning to cram everything into Part II, I've come to the realization that this will be a Series of Reviews. That said, in Part II I follow up with more reactions to the device itself after having spent more time on it and have also included a one cut, no excuses Video Overview (6 minutes) that will give you a first-hand look into what OS4.6 offers. Parts III and IV will dive deeper into OS4.6 (tons of screen captures and more video to come!).

Ironically enough, despite having the device in my hands, I’ve found myself having to search back through CrackBerry.com to try and dig up some of the stats (ie. processor and chipsets). Pulling up the OS info on the device is easy, but it’s too bad there isn’t a System Properties screen or utility that will tell me the details straight out (at least I’m not aware of how to access this info from the device ). I’m actually tempted to bust out my jewelers screwdrivers and pull the device part… give me a few days. I don’t want to put the 9000’s life in jeopardy quite yet. So to the best of my knowledge, here’s what this particular BlackBerry 9000 is rock’n:

Looking at the specs, the only feature here to disappoint is the BlackBerry 9000’s internal memory. Some of the early 9000 rumors suggested 1GB of internal memory which has not turned out to be the case. Ignore that one tiny factor, and the specs above make for a kick’n device – Quad-band GSM/3G/WiFi/GPS all in one, coupled to a fast processor and an amazing display.

Despite rumors and worries, in the time I have had the device the battery life appears to be pretty good. There is a lot more real-world testing to be done here as I’ve been in my home office and connected to WiFi, but despite a lot of playing around on the device the battery appears to be holding out strong. I’m gaining confidence that when the 9000 hits the market it won’t break RIM’s tradition of devices that easily go 24+ hours under “normal” use.

Speed – The 9000 is fast. Everything is quicker. And smoother. The Curve is a relatively speedy device, but I often find it’ll get “hung-up” – there can be slight lags when you’re doing something on the device (opening an app or menu option) or the device itself is doing something in the background (receiving email, pulling feeds, etc.). The 9000’s processor really flies through everything – no lags to report during regular use and it handles bigger tasks like photo capture and video recording with ease. Movies, music and images that are saved to media card open in a jiffy too. Swapping themes happens in a snap too. Web browsing via WiFi is also a lot faster than it currently is on my 8320 – likely the result of both improved protocols and the additional processing speed. Two thumbs up for speed.

Display – As mentioned above and in Part I of this BlackBerry 9000 review, it deserves repeating - the 480 by 320 LCD display is excellent. Even with the screen backlight turned all the way down to 10% the display is bright and clear and images look good. Oh, I almost forgot the best part – not only is the screen higher resolution, there’s more screen real estate as well. The 9000’s LCD is roughly the same height as the display on the Curve and 88xx at just over an 1½”,  but the 9000’s width measures in at 2¼” – pretty much a quarter inch gain. It might not sound like a lot, but coupled with the higher res the 9000’s display appears a lot bigger. Us BlackBerry users would never think it, but if you handed the device to a longtime Treo user they would mistake it for a touchscreen and start tapping at the 9000's shortcuts, which on the default Precision themes are nice and big.

Keyboard – Subtle changes make a big difference. Since posting Part I of the review, I spent a good hour going back and forth between my 8830 and 9000 to try and figure out exactly where the differences lie. It’s strange, because the more I look at the two keyboards, the more identical they seem, yet the more I use both keyboards the more I realize the 9000’s is much improved. Maybe I’m hallucinating all of this, but here’s my story and I’m sticking to it: the 8800’s keys each have a pronounced ridgeline molded on top of a relatively flat key vs. the 9000’s where the raised portion of the key is on a more gradually incline. Translation: when you press a key on the 8800 and move to the next key, the keys themselves actually trip your thumbs up on the keyboard. The ridgelines catch your thumb as you move from key to key. On the 9000, when you put thumb to plastic the key to key transition is simply smoother, allowing you to type faster and seemingly with less errors.

Note the Brightness of the Trackball!

MicroSD port – Externally accessible. The way it should be. I’m sure RIM will never manufacturer another smartphone where it will be necessary to remove the battery to insert the media card.

Sound Quality – I’ve taken a dozen calls now on the 9000, and the sound quality is excellent. No real surprise there. But what has surprised me is the quality of the 9000’s internal speakers. I’m guessing they received a major upgrade as for a little device the 9000 can really pump out the tunes. The Speakerphone is MUCH BETTER as well on both sides of the equation - people's voices come through nice and crisp and others have told me they would never have even realized I'm on speakerphone if I didn't tell them. It’s good to see RIM is taking this whole media / entertainment thing seriously.

GPS – Haven’t been able to test this out yet, as it seems BlackBerry maps didn’t come preloaded and Google Maps didn’t work (it installed ok, but got a “folder” as a shortcut on the home screen and when I clicked it I got an Exception error). It seems at this point 3rd party software developers will need to do some tweaking to make everything run smooth on 4.6.

LED – As if I already didn’t suffer from BlackBerry-induced A.D.D, RIM has gone ahead and made the notification LED even brighter. This thing is piercing. It’s impossible to ignore (and don’t say turn it off as that’s not really an option). Even as type this with 9000 by side, the red light is blinking and it feels like somebody is pointing a laser pointer at my eye. Nevermind 3G, this could be where the battery issue concerns have come from – the LED is sucking back the power. LOL :-)

Trackball – The trackball appears a little ‘too small’ for the device. It is the standard issue BlackBerry trackball, but with the 9000 being quite wide and the adjacent menu/back buttons being so big, it almost seems a little lost. But what it lacks in relative size, the 9000’s trackball makes up for in brightness. Just like the notification LED, this thing is BRIGHT. It’s like RIM put a xenon headlight under the hood.

Right Side Convenience Key – When palming the 9000 in my right hand, the location of the right side convenience key seems about ½ inch to low. I’m sure there’s a reason why RIM chose to do this – maybe there have been complaints of people accidentally hitting hit when using the volume controls or maybe it’s a hardware thing. Regardless, its location isn’t quite as convenient as it could be… at least for me.

Battery Door - The release catch for the battery door is located at the very bottom of the phone. Once pushed in, you can (relatively) easily remove the cover, which is more akin to a shallow tub as it makes up the entire backside of the phone. The metallic edging surrounding the camera and flash has a brushed finish to it – not so user-friendly for taking self-portraits.

SIM Card – No open/close latch – just slide it in. Thank you!

When it comes to the device itself, the BlackBerry 9000 has sleek looks, a full QWERTY form factor that’s comfortable and usable (even if you are from the Curve camp) and amazing hardware components. It’s a solid foundation to power a pimped up OS. Be sure to watch the video at the top of this post for a preview of OS4.6, and keep it locked to CrackBerry.com for Parts III and IV where we will dive deeper into this next generation smartphone.

Discuss this Review in the CrackBerry Forums