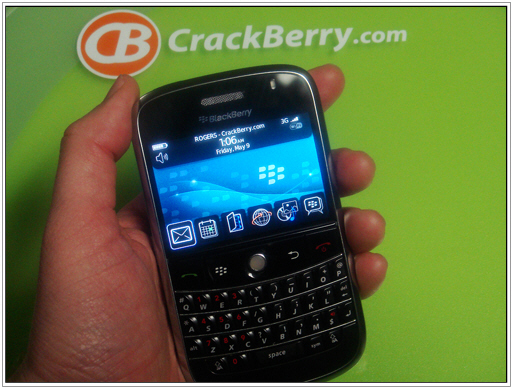 Another Look at the BlackBerry Bold 9000

While all of the new Precision themes we have seen to date thus far have had the same basic 'look', it turns out 4.6 also has another personality tucked up its sleeve. Check out the eye candy screenshots after the jump. This new theme adds some more color to mix, and organizes the ribbon more cleanly with folders, including default ones for Applications, Games, Downloads and Setup. Word To Go and Slide Show To Go get native icons, and within the Applications folder there is also Sheet To Go. It gives the 9000 a Bold look, very BlackBerry Bold you might say.

NOW, I'm going to go out on a limb here and make an educated guess... When the BlackBerry 9000 gets announced on Monday (WES Kick Off!) I am almost certain it will be packing a GIG of onboard memory. The 9000 I bought off eBay might not have that, but with such a focus being placed on Docs / Games / Downloads / Media on the 9000, I cannot for the life of me believe RIM would release it with anything less than that. Unless they ship each device with a microSD card (which I can't see them doing), there's just too much going on here to sell the device without ample onboard storage space. I hope I'm right. And I guess we'll find out soon.

I need to get to bed, but for all you BlackBerry Addicts out there I do plan on putting together another 9000 overview video that goes through the OS in more detail (though the current BlackBerry 9000 Quick Tour movie is getting some serious views on YouTube and if you also check out Reviews Part I, II and III you should have a pretty good idea of what the 9000 and OS4.6 is all about).

But before I adjourn for some zzzz's...I thought I'd leave you all with my current reasoning as to why I'll be buying this device again when it comes out, even though I love my 8320 Curve so much:

As for the 9000 form factor, it has grown on me a LOT. Unlike the reasons listed above, the form factor would never be one of the compelling reasons for me to buy the 9000, but it is very usable. It's a tad wide, but it feels thin in the hand and I *think* that extra width is what makes the keyboard so much better than the 88xx's despite looking much the same. And though it's heavier than the Curve, it doesn't feel heavy. If you're used to the Pearl you might not be able to make the jump, but I think any full QWERTY user (even Curve diehards) will find they can easily get comfortable on the 9000 within a few days as I have. Hopefully we'll see some good BlackBerry 9000 cases and accessories follow suit - I sooo need a holster for this thing!