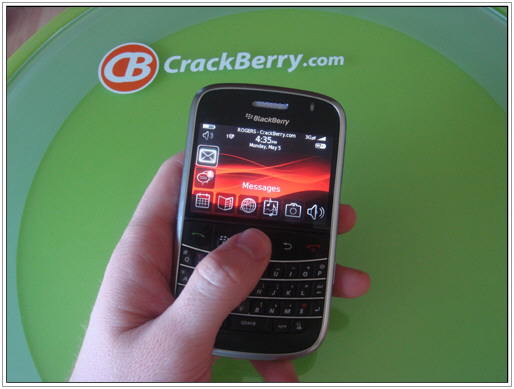 The Web's First Review of the BlackBerry Bold 9000.

Remember those three BlackBerry 9000 units that showed up on eBay? As I made note in an earlier post, when the auction got pulled by the powers that be (err.. RIM?!!) there were still two units remaining, leaving one Crazy BlackBerry Addict anxiously waiting for the delivery of this next generation BlackBerry smartphone.

As luck would have it, it turns out I’m the Crazy BlackBerry Addict! When mention of the eBay 9000s came up in the forums, there was plenty of discussion as to whether the devices were legit or not. The images accompanying the auction seemed too good to be photoshopped and were unlike any other leaked 9000 pictures I had encountered previously, so it only took a few minutes to make the decision to click the Buy it Now button and PayPal over the funds. At £399.99GBP + £19.99GBP shipping (~ $828USD) it was a gamble, but potentially a good deal considering previously reported rumors that the 9000 could carry an MSRP in the $900-$1,000 range. Worst case scenario if things went south I’d eat KD for a month and have a good story to tell.

As for these particular BlackBerry 9000s, the image above says it all. 100% the real deal. It was delivered to my house yesterday afternoon and I’ve been playing with my eBay-purchased toy ever since. You’ll want to keep it locked to CrackBerry.com. I was planning on writing up one super review, but there's simply WAY too much info to put into one post. Part I (this post) will cover the unboxing and initial impressions/comparisons and after getting a few more hours facetime with the device Part II will get into the device features and OS4.6. I'll follow that up with an in-depth video walk through and we are also going to record a Special Edition BlackBerry 9000 podcast. Craig and I will record the show Friday evening, so if the posts and video leave you with any unanswered questions be sure to call them in to our Podcast Hotline at 1-866-904-5772 ext. 222 and we will answer them on the show. My fridge is stocked with Red Bull, I have a BlackBerry 9000 in hand and I don't plan on sleeping until every feature has been tested and menu option explored. Let the FUN begin!

Read on for my initial reactions to the BlackBerry 9000 >>

I made the eBay purchase on April 27th and it arrived a week later. The seller didn’t offer any alternative shipping options so I was stuck with 5 Business Day International delivery. The last couple of days I was beginning to think my BlackBerry 9000 would wind up meeting the same fate as did the O2 8300 Curve I had tried to buy from the UK when it wasn’t yet available from AT&T. Apparently it left Europe but got lost in transit and never made it to Canada. I like to think it’s lying at the bottom of the ocean, waiting to be discovered by a worthy individual. That image is more pleasant than the unfortunate truth (thief!).

No Fancy Box, but the eBay BlackBerry 9000 Crossed the Pond Unscathed

The 9000 arrived in a well wrapped package that contained an even better well-wrapped package. No fancy BlackBerry box, but inside were the goods that mattered:

Once unpacked, I pulled the back cover off the device (you push in the button at the bottom and the entire back side of the phone essentially comes off) and inserted the battery. Now for the moment of truth. After a few seconds the red LED lit up (blindingly bright LED light I might add) and a few seconds later the display lit up and from there the 9000 took a leisurely 1m49s to boot up.

BlackBerrys always take a long time too start up – it’s a smartphone law of nature - but I thought maybe the 9000’s mighty processor would cut down on that time. And it did, but not by much. I conducted a quick boot-up race with my BlackBerry 8320 Curve clocking in at 1m59s and BlackBerry 8830 at 2m13s. There’s a good chance the 9000 will be snappier come its full commercial release, as I’m sure this pre-production 9000 is running a lot of “diagnostic stuff” in the background. Regardless, boot up time really isn’t an issue, as unlike so many other smartphones (cough..Windows Mobile...cough), BlackBerrys rarely crash! :-)

On the initial loading sequence a warning message came up (I haven’t been able to get it to pop up again) that contained a bunch of legalese. I clicked OK to the message before reading any of it. What I don't know can't hurt me right? I’m thinking maybe the eBay Seller had the same thought process – is it breaking the rules if you never see the message?!

From the images I had previously seen online of the BlackBerry 9000, I already had a good idea of what to expect when my package arrived in the mail. Since the original leaked photos of the BlackBerry 9000 emerged, I have remained adamant about reserving my final judgment on the 9000 until I actually got to lay my hands on the device. That said, my initial impressions were not observations, rather, the details which immediately caught me by surprise:

Surprise # 1 - the metallic band around the perimeter of the phone is not metal. Based on the photos I had seen to date, I just assumed it was metal. But plastic she be! At least on this particular phone. Think back to the most recent post on BlackBerry 9000 Final Specs and you’ll remember the hokey line that read “High quality material, high-end finish”. Maybe that means the final-spec 9000 will ship with a metal band, though I doubt it. To be honest, plastic trim is probably better - it saves on weight and is not as cold to the touch.

Surprise # 2 – keyboard seems pretty good! I’ve never been a fan of typing on the 8800 series, preferring the small keys with spaces between approach offered by the 8700 and Curve series. But I only had to thumb the keys for a few seconds while the phone was still booting up to realize I could quickly get used to the 9000’s keyboard. Maybe this is just me being overly enthusiastic about a new device (and never fully giving the 8800 a chance before as I had the Curve), but I think maybe the very slight changes to the 9000's buttons (compared to the 88xx’s keyboard) have made a big difference.

Too bad the metal band is plastic, but OS4.6 ROCKS!

Surprise # 3 – Screw waiting for OS4.5, OS4.6 is WHERE IT IS AT! They say looks don’t matter, but when it comes to your mobile companion that’s simply not the case. The leaked images of 4.6 have looked good – seeing it in person is SO MUCH BETTER. It’s smooth, it’s fast, it’s pretty. We’ll talk a lot more about 4.6 in Part II.

Surprise #4 – the display is AWESOME. I knew it would be an improved display, but I wasn’t expecting it to be as bright and crisp as it is. The 480 by 320 HVDA Color LCD delivers. For the 88xx, Curve and Pearl users reading this who shunned the notion of upgrading to the 9000 when it comes out, let me just say this display alone will make you want to reconsider.

Surprise #5 – 3G logo?! Seeing the 3G logo on a BlackBerry for the first time…now that’s just special. It nearly brought a tear to my eye.

At this point I realized I did not have my SIM card yet installed in the 9000. I rebooted and to my relief quickly discovered my BlackBerry 9000 was in fact completely and fully usable (I had a feeling that since the eBay auction was pulled maybe the device would be remotely locked out somehow). With SIM card installed,the device Registered on the Rogers Network. I logged into my BIS account online where it detected the new PIN and asked me if I wanted to switch to this device. I did, sent the Service Books and was up and running. Last thing left to do was sync my contacts over (yup, BlackBerry Desktop Manager 4.3 seemed to work fine for me with the 9000) and insert my Media Card into the externally accessible slot. The BlackBerry 9000 is officially now my daily driver!

The BlackBerry 9000 features a full-QWERTY keyboard that is similar to that of the 8800 Series, standard issue trackball, and oversized central navigation/phone buttons which are smooth, look great and seem pretty easy to locate and press. Around the perimeter of the device the 9000 features left and right side convenience keys, volume controls and mute/standby button. Generally speaking, the phone feels solidly built, deceptively light for its size (from looking at photos I expected it to be heavy, and it's not!) and you can just tell RIM put great care into the overall visual package. Between holding the 9000 in my hand, and seeing the recently leaked images of the BlackBerry KickStart, I think its safe to say the days of a function before fashion are gone for RIM.

Unlike its other full-QWERTY BlackBerry siblings, the 9000 features an externally accessible microSD port which should be able to handle BIG Media cards. On the bottom left/right corners of the 9000 are two “indented silver buttons” – after a few minutes of pondering it dawned on me that these are not buttons, but are most likely charging leads (typically gold-colored on other BlackBerry models) for a to-be-released at a later date BlackBerry Desktop charger. The 9000 also receives the 3.5mm headphone jack.

Compared to the BlackBerry the 88xx, the 9000 is longer, appears to be a bit wider (though when you line them up they are the same) and is maybe a little thicker. But when it comes to holding the 9000 in the hand, compared to the 8800 it feels much thinner. Unlike the 8800’s straight sidewalls (think ‘Brick’), the BlackBerry 9000’s battery casing is 'set into the phone', reducing the bottom half of the device’s width, making it feel extremely thin when held in the hand. If you are currently a BlackBerry 88xx user, you will have no trouble transitioning over to the 9000.

The transition from a BlackBerry Curve to a BlackBerry 9000 may require more of an adjustment period for longtime users. RIM really got things right with the Curve. It’s small, lightweight, fits comfortably in the hand and is easy to type on. In comparison, the 9000 is quite a bit wider (I think that’s my only form factor gripe - it throws my grip slightly out of the totally "natural" feeling) and is a bit heavier - about 30 grams heavier than the 8320 according to my kitchen scale.

I’ll leave the BlackBerry Pearl out of the comparison, as that’s a completely different form factor altogether, but push come to shove while the Curve gets a slight edge for feeling good in the palm of the hand, the 9000 really does not give up that much to it. After using the 9000 for only a few hours, it's beginning to feel quite natural. And for that little bit the 9000 does give up in terms of feel, when it comes to hardware and features it seems the 9000 will leaves every other BlackBerry made to date in the dust.

Be sure to check out Part II, which features a Video Overview of the device and OS and more reactions to the BlackBerry 9000 after spending more time with it.