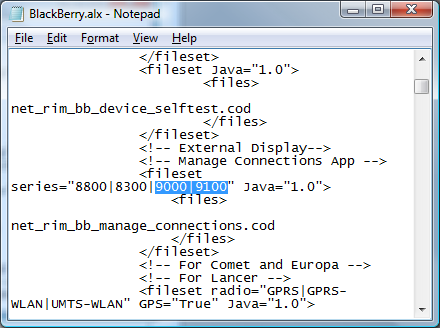 Jibi posted some interesting snapshots over at BGR today pulled from a BlackBerry.alx file. Pretty cool stuff here. From the file code, Jibi made some observations and discoveries:

With this file referring to both a 9000 and 9100, that basically confirms a) that the 9000 we have seen is the 9000 and b) there's a 9100 device in the works. What's the difference going to be?! What's the 9100 going to pack that the 9000 doesn't? Or will it be basically the same phone just branded a bit different for Vodafone? You can check out more of Jibi's images here, and if you have any guesses, insight, or know what's going down be sure to drop it in the comments! I'm kind of getting done with the pre-9000 posts...I just want the device in my hands already!!!