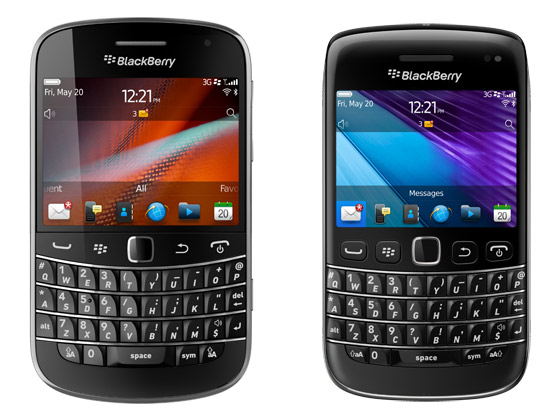 There are a lot of BlackBerry Smartphones out there in the world. Our Founder and Fearless Leader, Kevin Michaluk, recently counted more than 30 devices released by Research In Motion just since the BlackBerry Bold 9000 started selling "way back" in 2008. With all the different models out there, it can be a little daunting to keep track of all the phones available to you. That's why CrackBerry is here to help.

Recently, Research In Motion announced a few new phones in addition to the OS 7 Smartphones announced earlier this year. Two phones, the BlackBerry Bold 9900 and the BlackBerry Bold 9790 are similar in name and innards. On the other hand, the look and feel of the devices are quite different. So let's take a look at what separates these two models.

This is Reseach In Motion's flagship BlackBerry Smartphone. It's the thinnest Bold the company has ever made, has a distinctive stainless steel band surrounding it, and has what many call the best QWERTY keyboard in the mobile world. The Bold 9900 has all the bells and whistles you'd expect from a top of the line BlackBerry Smartphone: a fast processor, a high resolution touchscreen, BlackBerry OS7, and a decent 1230 mAH battery. Frankly, there just isn't room in this short article to learn all about the Bold 9900.  Check out our CrackBerry Superpage for our complete coverage.

Who is it for: Users who want the best possible BlackBerry experience

As to why RIM created a similar but less-powerful Bold, there are several reasons. RIM tries hard to create a BlackBerry Smartphone for everyone. The 9790 itself is physically smaller than the 9900; not everyone likes a giant Smartphone. More importantly, the Bold 9790 is a Bold-on-a-budget. The slightly lowered specifications means this Bold should sell for substantially less than the 9900. Everybody likes a good deal.

Who is it for: Users who want a top-quality, front facing keyboard BlackBerry without breaking the bank. The Bold 9790 is actually being marketed toward women (smaller hands, smaller phone) by RIM as well.

Bonus Feature: The Bold 9790 has a 5 MP auto-focus camera. This is not the same as the much-bemoaned EDOF camera in the Bold 9900. Score!

New BlackBerry users may not get down into the numbers when it comes to device specs, but for those that want to get in a bit more we have a comparison chart so you can see how each device matches up across the board.

For more information on all of the new devices, be sure to check out our full reviews, help forums and device superpages.