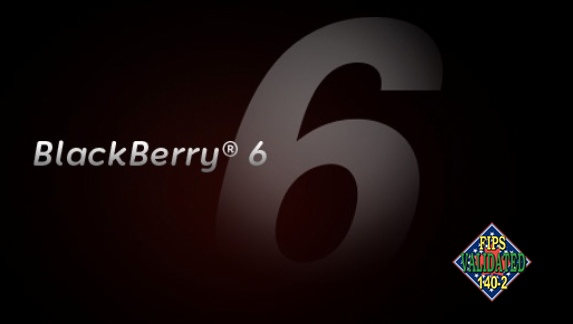 "This FIPS certification will help extend the reach of BlackBerry 6 to users in a wide range of government agencies and other security-conscious organizations in the U.S.," said Scott Totzke, Vice President, BlackBerry Security Group at Research In Motion. "BlackBerry 6 offers an exceptional mobile experience for BlackBerry smartphone users on the most secure wireless platform in the industry."

Maybe now that it's been FIPS certified we'll see it roll out officially to more carriers and devices? Full press release is available after the break if you want to dig into the finer details.

BlackBerry Torch and Other BlackBerry Smartphones Running the New BlackBerry 6 OS Now Certified for Use by U.S. Government Agencies

"This FIPS certification will help extend the reach of BlackBerry 6 to users in a wide range of government agencies and other security-conscious organizations in the U.S.," said Scott Totzke, Vice President, BlackBerry Security Group at Research In Motion. "BlackBerry 6 offers an exceptional mobile experience for BlackBerry smartphone users on the most secure wireless platform in the industry."

FIPS is a U.S. government computer security standard for certifying cryptographic modules. The standard was developed through the Cryptographic Module Validation Program (CMVP), which certifies products for use by U.S. government agencies and regulated industries that collect, store, transfer, share and disseminate sensitive information. Product certifications under the CMVP are performed in accordance with the requirements of FIPS 140-2.

In addition to various FIPS certifications, BlackBerry(R) products have passed rigorous security assessments from a variety of other independent organizations around the world. For example, the BlackBerry(R) Enterprise Solution has been approved through the CESG Assisted Product Scheme (CAPS) in the United Kingdom and by the Defence Signals Directorate in Australia, and has also received Common Criteria EAL 4+ certification." As a result, the BlackBerry Enterprise Solution has been approved for storing and transmitting sensitive data by the North Atlantic Treaty Organization (NATO) as well as government organizations in the United States, Canada, the United Kingdom, Austria, Australia and New Zealand.

For more information about security and the BlackBerry platform visit www.blackberry.com/security.

Research In Motion (RIM), a global leader in wireless innovation, revolutionized the mobile industry with the introduction of the BlackBerry(R) solution in 1999. Today, BlackBerry products and services are used by millions of customers around the world to stay connected to the people and content that matter most throughout their day. Founded in 1984 and based in Waterloo, Ontario, RIM operates offices in North America, Europe, Asia Pacific and Latin America. RIM is listed on the NASDAQ Stock Market (NASDAQ:RIMM) and the Toronto Stock Exchange (TSX:RIM). For more information, visit www.rim.com or www.blackberry.com.