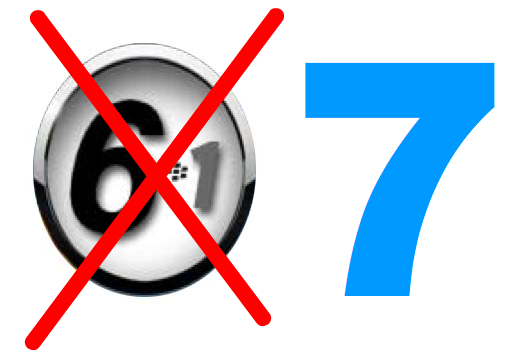 If you're a CrackBerry regular, you'll know both the operating system names BlackBerry 6.1 and BlackBerry 7 have been talked about quite a bit. BlackBerry 6.1 is the evolutionary upgrade to BlackBerry 6, and its existence and some of its features have already been announced by Research In Motion back at DevCon Asia at the start of the year (you can learn even more about it's features in our 2011 Roadmap post).

BlackBerry 7 has been rumored about too, and so far has been acknowledged as being that magical unicorn OS that finally brings the best of the traditional BlackBerry OS and BlackBerry Tablet OS together for a QNX-based Smartphone. At least that was the case... until now.

We've now received word from numerous sources that next week at BlackBerry World we'll see BlackBerry 6.1 now be unveiled as BlackBerry 7. And no, it won't be QNX-based so don't get your hopes up for that. Why the name change? We're not totally sure. Since the new OS will launch on new devices (I hope they announce the BlackBery Bold 9900 next week!) it could be they wanted to up the 6.1 value proposition with a new-sounding OS to match the new hardware. Or it could be that because some of the new features in BlackBerry 6.1/7 require hardware that's not currently in BlackBerry 6 Smartphones, that we won't see 6.1/7 hit current BlackBerry 6 phones so RIM wanted to differentiate the OS numbers a bit further than one decimal place. Keep in mind on our 2011 roadmap we also saw references to a "lite" version of BlackBerry 6.1 - so hopefully that means we'll still seem solid updates come to current BlackBerry 6 devices.

And I guess this news means that BlackBerry 8 is now the QNX-based phone OS a lot of us will be waiting for (though we keep hearing these new phones are super sweet so I'm still looking forward to BlackBerry 7).  Ahh well, I'm sure we'll know more soon, so keep it locked to CrackBerry.com as we hit Orlando for BlackBerry World next week!