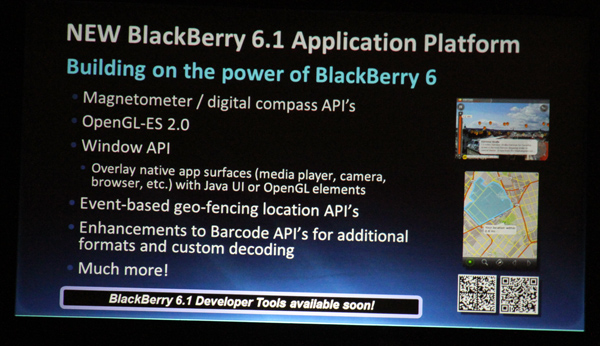 At the General Session Keynote on the opening day of BlackBerry DevCon Asia, Tyler Lessard, VP of Global Alliances and Developer Relations for RIM, announced the coming of the new BlackBerry 6.1 Application Platform for BlackBerry Smartphones. 6.1 will build upon BlackBerry 6 and for developers will introduce some new features they can take advantage of. The image above tells the story. New tools/APIs include:

Tyler went on to say that BlackBerry Developer Tools 6.1 will be available soon for download as they want developers working with the new tools leading up to the release of BlackBerry 6.1 in the next quarter or two. Reading between the lines, I think this announcement really says a lot. It shows us that despite a ton of effort going into the BlackBerry Tablet OS used on the PlayBook, RIM is continuing to develop the traditional BlackBerry OS. I think it's also safe to assume that we'll be seeing a BlackBerry 6.1 update coming to current in-market BlackBerry 6 Smartphones. Finally, it gives us a clue as to what OS is going to ship on the next generation of BlackBerry Smartphone hardware. RIM's Founder and Co-CEO Mike Lazaridis has already gone on record saying that we will see BlackBerry Smartphones (aka super phones) that will make use of the QNX-based operating system found in the PlayBook, but that it might not be tomorrow as the hardware needs to get there (need a phone battery than can last a day powering dual core processors). Now officially knowing that BlackBerry 6.1 is on the way, to me it's looking like we can expect the next wave of new BlackBerry Smartphones to rock 6.1 (maybe a generation after that will hit the phones). It's clear that the BlackBerry Tablet OS is still very young and will take some time for RIM to evolve it to be ready for the phones, so in the meantime BB6.1 will get the job done. That's not official of course, but logically it's making sense. I'm sure we'll learn more in the weeks and months ahead!