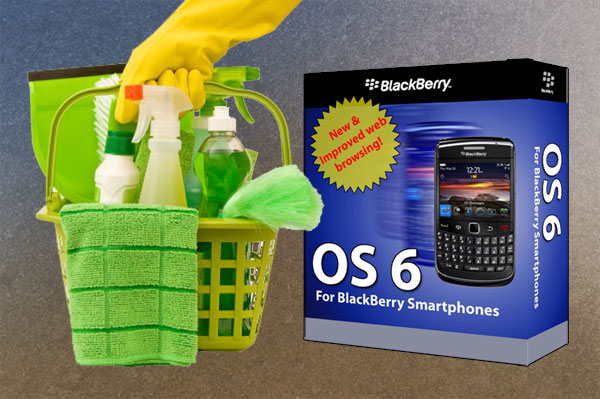 In this article, we explore how to completely remove and reinstall a BlackBerry Operating system. This project is not for everyone. During the process, we'll show you how to render your BlackBerry completely useless. Granted, that's the desired result; but if that's not something you're comfortable with, perhaps this project isn't for you. It wasn't for me until a few months ago. If you are looking for a way to update your BlackBerry's operating system, there are simpler ways.

Every so often, I like to give my computers and other electronic devices a bit of spring cleaning. On my windows machines, it clears out all of the dead folders, broken registry entries, and old programs that I never use. On those machines, I'll format the drive and reinstall the OS, giving me a computer running like it just came out of the box. You can do the same thing with your BlackBerry.

Perhaps you are noticing increasing errors on your BlackBerry; this can sometimes be caused by applications that don't delete properly. Perhaps you'd like to try out a leaked OS and want to install that to a clean slate. Maybe you've installed that leaked OS and now want to roll back to an earlier version. In each of these cases, you'll need to completely wipe the OS from your device in order give it a clean, untouched installation.

A Word of Caution, A Word of Advice

If you are good with computers and comfortable with electronic devices, you should have little difficulty in accomplishing this. I would suggest reading though this entire article before attempting the project. There are several steps; an error in one could cause data loss and major problems with your device. Reading through and then carefully following the steps will greatly reduce that possibility.

Should you run into trouble, there are articles, forums, and people to help.

If you don't feel comfortable attempting this yourself, no worries. Many of you will have friends, family, and coworkers who will gladly assist you. Please note that the customary gratuity for such services is generally one (1) let-me-buy-you-lunch.

Before beginning, you will need the assistance of several tools and files.

Since we'll be using BBSAK to wipe the device, you can choose an OS that is an earlier or a later version number than one currently installed. If we were to use the Desktop Manager or even app loader to install the OS, we could only install the same or a newer OS. Desktop Manager would even install the new OS on top of the old OS, leaving apps and most settings untouched. For most people, this would be fine. But we're not most people.

So you can choose which OS to install to your BlackBerry. You can choose an official OS, a leaked OS, or even a hybrid OS. I've never attempted to use a hybrid OS, but many people find them quite interesting.

We'll be using BBSAK to install the OS, so you can install as many OS's to your computer as you'd like. Remember: Each BlackBerry operating system you obtain will need to be installed to your computer first.

Since we will be completely deleting all of the information off of your BlackBerry, it might be a good idea to perform a backup, first. In this article, we will back up both the data on your BlackBerry as well as any third-party apps.

Connect your BlackBerry via USB and complete a backup as normal. As a good habit, I recommend saving the backup as a different file each time it's performed.

Once this has finished, close Desktop Manager. We will be using BlackBerry Swiss Army knife for the remainder of this project, so it is no longer needed. Additionally, the Desktop Manager can interfere with using BBSAK. Go ahead and close DM, but leave your BlackBerry attached via USB.

Start BBSAK and enter your device password (if any) when prompted. If you've connected properly, you'll see your BlackBerry's PIN near the upper right corner. Backup your third-party apps using Backup Apps button in the lower portion of the program.

Once completed, you'll see a screen like the one above. If you do not see a list of COD files that were backed up, then the backup was not successful. Though a quirk of programming, BBSAK can erroneously tell you that apps were backed up when they are not. This usually happens when both BBSAK and the BlackBerry Desktop Manager are both trying to talk to your BlackBerry. In this case, Desktop Manager wins. The solution? Close the Desktop Manager and click "Backup Apps" again.

You'll be able to restore these applications after completing the OS installation.

This is it folks; this is the step in which we turn your BlackBerry (intentionally and temporarily) into a very expensive paperweight. Before you begin, you'll want to make certain that you have completed your backups and understand all of the following steps. Make sure you know how to bring your BlackBerry back to life before deleting all of the data on it.

One last time, make sure you have your backups completed. Once you've pressed the Wipe button, that's it. Okay, ready? Here we go. Click the Wipe button and BBSAK will begin the process. It will take a few minutes. Once it has completed, your BlackBerry will reboot, unsuccessfully. You'll end up with the dreaded 507 screen. Fear not, this is what we want.

There are a number of ways to load an OS onto your pristine BlackBerry. You could use the Desktop Manager, App Loader, or BBSAK. Since I've already extolled on the virtues of using BBSAK to manage multiple OS's, we'll use that.

Immediately under Backup Apps is a button marked Load OS. Click it. Select your desired OS from the list provided. If you do not see the OS you want or if you see no OS options, this means it/they were not installed to the computer. After downloading an OS from the internet, it must first be installed on your computer.

Select your desired OS and click Load OS. This process can take up to fifteen minutes to complete, though is generally much less than that. Once this process is complete, your BlackBerry will automatically reboot. This reboot will take much longer than normal. This is to be expected.

When your phone reboots it will need to register with the wireless network. You'll get a message when this is successful. It shouldn't take long.

Now that you have a (almost) brand-new device, you'll want to load all of your data onto it. I would suggest beginning with your BlackBerry data before restoring your third-party apps, but there's no rule preventing you from going the opposite way.

Some may consider not restoring the apps. Whenever I install a new OS, I use that time for a bit of spring cleaning. If I need to reinstall an app, I'll usually download it again from App World or even from my CrackBerry App Store account. Since my CBAS account keeps track of all my apps and their activation codes, I never have to root around in my inbox for a purchase email. I get a fresh installation of my apps, and I get only the apps I truly want on my BlackBerry.