or Help! A Theme (or application) has locked up my BlackBerry! 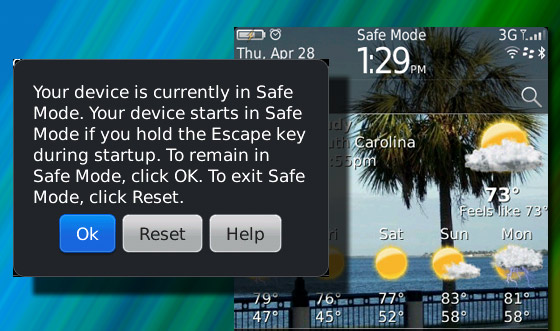 Safe mode allows your BlackBerry to start without applications or themes; oddly enough, it is similar to safe mode on a Mac or Windows PC. The core functions of your phone are there: calls, messages, Bluetooth. Any applications that run in the background (Where's My Phone, SOTI Pocket Controller, et. al.) are not loaded. Once the phone is in in Safe Mode, Neicy can easily delete the application or theme causing the problem.

PRO TIP: Not sure what's causing all the ruckus? Remove your most recently installed application or theme first. If that doesn't fix things, move on to the next most recent.

To enter safe mode, you'll need to do a battery pull; though sometimes a soft reset (Alt - Right Shift - Del) will do the trick. Once the red light goes out, press and hold the Escape (back) key until the BlackBerry starts up. It's not needed to hold the key for the entire startup sequence, but do hold it down for at least a slow count of 10.

You'll get a message once the phone restarts, letting you know the phone is in safe mode. It will also display Safe Mode at the top of the screen. It's at this point that Neicy would be able to delete that bad theme (or application). Once that's done, all she (and you) needs to do is restart the phone with another reset or battery pull.