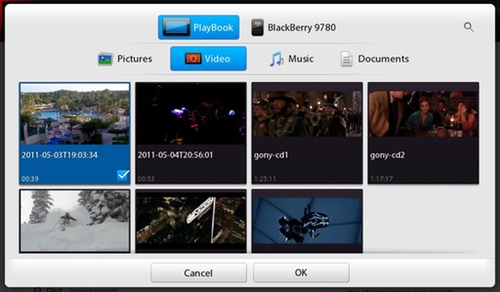 While Research In Motion spent a lot of time integrating YouTube directly into the BlackBerry PlayBook for viewing videos, one thing they seemingly left out from the PlayBook YouTube client was a means of uploading videos directly to YouTube from the PlayBook.

That of course, doesn't mean uploading videos taken with your BlackBerry PlayBook is out of the question though. in fact, it's rather easy to do -- once you know the basics of what it is you are supposed to be doing in order to offload those videos. Read on past the break for a full run down of how to upload videos taken on your PlayBook directly to YouTube.

The first thing you'll need to do after you have a video recorded and ready for upload is to head on over to the YouTube website. From there, you'll need to log in directly to your personal YouTube account -- once logged in, in the top right hand corner you will see the "upload" option, just go ahead and click on that.

From there, you'll want to head down to the lower left and find the area where it says "Basic uploader" as highlighted in the image above. Once that loads up, you'll be tossed into a lighter uploader interface, one which will allow you to browse the file system on your BlackBerry PlayBook and ultimately upload videos directly to YouTube.

Now that your video has begun uploading, you can fill in all the regular options that YouTube allows for such as title, description, tags and all your individual sharing and embedding options. Once completed, YouTube will produce a URL for you to your video that you can share with friends or whomever you wish. Did I mention how it will be uploaded in 720P HD and is capable of 1080p as well? No? Well, it will be. High quality HD content direct from your PlayBook straight to YouTube.

The video above was uploaded to YouTube directly from my BlackBerry PlayBook using this method described above -- so have at it folks. Go ahead and start sharing those videos directly from your PlayBook. Just in case YouTube is not your preferred video sharing site, I've used this method on Vimeo as well and it works just as easily and I'm sure it will work for many others as well -- though, I've not tested all possible sites.