So, you've found yourself with one (or eight) too many applications and/or games on your BlackBerry; it's time to delete some apps. There are lots of reasons to delete an application: freeing up memory, installing a paid version of the app, installing a better app.... Whatever the reason may be, it's really easy to uninstall one.

Oh, you wanted more? Maybe a video? How about learning about the other three ways to remove an app? Read on.

What BlackBerry operating system are you using? 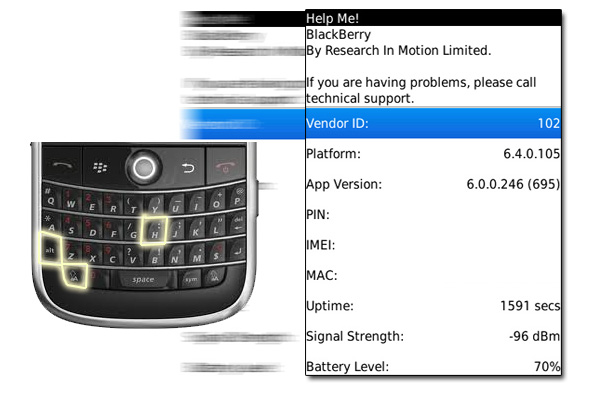 The steps for deleting an application are virtually identical whether you're running OSFive or OS6. Still, it's always a good idea to know what OS you're running. The easiest and fastest way to tell involves teaching you a BlackBerry Pro Tip. Learn this well; use it to impress your BlackBerry-wielding friends. Here's how to bring up the Help Me! screen; it's full of useful information.

You're going to press the alt key, the left shift key, and the letter H all at the same time. You can press the letters one after the other, but all three keys need to be held down at the same time. Pearl users can hold the alt key and type R A C E. Storm users will hold down the return (back) key while they click the top left corner, then the top right, top left, top right and release. Slightly complicated, but it works. When done properly, you'll see the screen below.

Take a look at that picture up there. Do you see the line that says App Version: 6.0.0.246 (695)? That's the version of the operating system; don't worry about the numbers in parentheses. That first bit of the version number tells me this BlackBerry runs OS 6.0; other phones might say 5.0 or even 4.6.

Deleting an app via the Options menu

This is the one part of the process that's a little bit different depending on your operating system. And it's only a slight difference in the options menu. To begin, the process is the same. Find the icon for the options menu, it usually looks like a wrench; thought it may differ if you have a theme installed.

From here, you can find the application you wish to remove. Of course you can scroll through the list, but it's much faster to type the name of the app to be uninstalled. Once you've found your (un)desired app, click on it's name to get more information about the app. From there, you can choose to delete the app. Alternately, you can highlight the app, press the menu key, and choose delete from the menu.

In any case, you'll need to confirm that you really, really want to delete the app. It will take a few moments for the BlackBerry to do its thing; you will soon be prompted to reboot your BlackBerry. If you're doing a little spring-cleaning and plan on deleting several apps, choose later. You can postpone the rebooting until you have removed the last one.

Deleting and Archiving via App World

For any of the apps you've purchased or downloaded with BlackBerry App World, you can delete and even archive them through App World. Archiving an app means that you'll uninstall an application and store its installation files on your microSD card. Here's a video explaining more.

Deleting an application through App World is done much in the same way. You'll still open App World, go to My World, and highlight the application. To delete (uninstall, remove) it, press the menu key (the BlackBerry key) and choose Delete from the list. You will most likely need to restart your BlackBerry after the application is deleted. To reinstall the app, you must go through the whole process of downloading and installing it again.

Deleting an App via the BlackBerry Desktop Manager

The fourth and final way to delete applications from your BlackBerry involves a USB cable and Desktop Manager. It is by far the most cumbersome way to remove applications, but it's a perfect solution if you are deleting more than one app.

To the right of each listed application is a button with an X on it. For each application you want to remove, simply click the X. Don't worry if you make a mistake, your applications won't be deleted until you click the Apply button at the bottom right of Desktop Manager. Once you decided on apps to remove and clicked the Apply button, Desktop Manager does its thing. When all the apps have been removed, your BlackBerry will automatically restart.