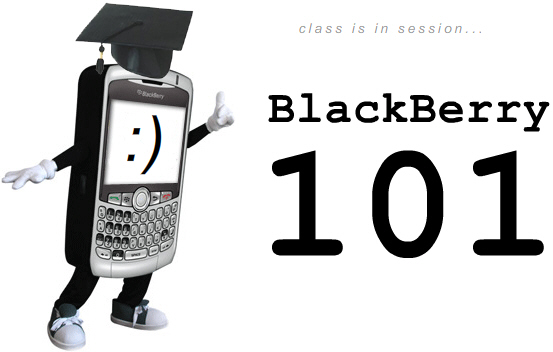 Research In Motion (RIM) is constantly developing and testing new software and applications for your BlackBerry.  Keeping up to date with the newest operating system (OS) software for your smartphone ensures that you have access to all the latest and greatest features and performance tweaks.  With the official release of BlackBerry OS v4.5 on the horizon—various beta, or test, versions of the software are already bouncing around the Web—we thought this would be a great time for a BlackBerry OS tutorial.

What follows is our step-by-step guide on how to upgrade your BlackBerry's OS, or install a different version, as well as how to prepare beforehand to make the process run as smoothly as possible.

To start a new operating system install, you'll need your BlackBerry, an Internet-connected PC, a USB cable and about an hour and half of free time—50 minutes or an hour for the upgrade process and 30 minutes or catch-up time afterwards.  Mac users beware: RIM doesn't currently offer the BlackBerry Desktop Manager software for Apple computers; however, industrious Mac owners running Parallels and who have a copy of Windows have been able to upgrade their BlackBerrys via Macs, though the process can be a bit clumsy.

If you've got all the necessary tools listed above, the BlackBerry OS install process should be a breeze.  Let's get started.

How to Install or Upgrade to a New BlackBerry Operating System

First things first, you'll want to download the new BlackBerry OS and save it to your PC.  To determine what OS version you're currently running, click the Options icon on your BlackBerry home screen and select About.  Your OS version will be listed as a series of numbers after a lowercase V (v4.2.2.184) on the first screen. You can also employ the Help Me screen shortcut to determine your current OS version by hitting ALT, SHIFT and the letter H.

To obtain the latest operating system for your BlackBerry device, first check your wireless carrier's website.  This is the best way to get official RIM OS software.  Your carrier may ask you to login to download the software, so you might need to create an online account if you haven't already done so.  Once logged in, locate the system upgrades section, check to see if there's an OS version that's more recent than the one you're currently running, and if so, download and save it to your PC's desktop.

Save the latest BBOS onto your Windows-powered computer

If you decide to download and install an unofficial version of the BlackBerry OS, you should beware that you're doing so at your own risk. Beta operating systems are not officially released for good reason: They're often full of bugs and could potentially void your warranty or worse, render your BlackBerry unusable. (Read, "How to Reload the Operating System on a Nuked BlackBerry," if you ever find yourself with a bricked 'Berry. If you do decide to install unofficial software and it's from a carrier that isn't your own, you should be sure to ditch the software's vendor XML file before beginning installation. To do so, open your PC's Program Files > Common Files > Research In Motion > AppLoader and then delete the Vendor file, which is in XML format.  If you don't delete the other vendor's file, the software won't be able to install the software on your carrier-locked device. You can visit Crackberry.com's OS4.5 Beta forum for discussion and help should you run into issues.

Next you should ensure that your PC is running the latest version of the BlackBerry Desktop Manager, which is v4.5.

If you're not running Desktop Manager v4.5, visit RIM's site and download and install the latest version of the software.

3) Prepare for New OS By Noting Apps, Services or Setting That Could be Affected

Many third-party apps will also require you to reenter your user name and password, so you may want to make note of which apps require a login and make sure you've access to the necessary information.  For example, your Viigo RSS reader will prompt you for login information the first time you try to use it, as will Facebook for BlackBerry, your Twitter client and the Flickr app.  I also noticed that the color of my jazzy new CrackBerry launcher changed from orange to cyan…

It's a good idea to switch back to an official RIM theme if you're using a third-party option, at least at first, because some features of non-official themes won't work properly on the new OS.

And it's worth noting that applications are meant to run on specific OS version so they may not work at all after you upgrade.  The Freedom Universal Bluetooth Keyboard, which I reviewed for CrackBerry in May, functions along with an application that will only work on BlackBerry OS v4.0 through v4.2.

After you've prepared for the changes that come along with a new BlackBerry OS, you'll want to begin the installation process.  First, close all related applications and services on your PC and launch the .exe file.  Choose Run and select the appropriate setup language.

The InstallShield Wizard for BlackBerry will then appear. You should click Next and then on the following screen choose the country in which you're currently located. Accept the terms of service and hit "Next" again.  When the install process is complete, the program will ask you if you want to start the BlackBerry Desktop software.  Fill in the check box next to this option and then hit "Finish."

Install OS4.5 onto your computer

When the Desktop Manager software opens, plug your device into the PC via USB cord.  (If for some reason, the desktop manager software does not launch after a few minutes, go to your Windows Start menu > All Programs > BlackBerry > Desktop Manager.) You'll then see a dialogue box that tells you it's searching for device application updates and a few seconds later another box will appear asking if you want to install the available upgrades. Click Update Now and a summary page will appear detailing the specific applications that will be affected.

From there, hit the Options tab beneath the Data Preservation and Device Backup heading and ensure that the Backup Device Data Automatically During the Installation Process box is checked. Then hit OK.

You can also click on the Advanced tab on the right side of the Desktop Manager screen to add or update applications that weren't included in the default list. For instance, if you deleted your BlackBerry Messenger app in the past but now want it back, you can hit Advanced and fill in the check box next to BlackBerry Messenger and the program will be installed along with your new OS.

Finally, you should click Next again, and you'll see an Application Loader summary page that explains how your device will need to be wirelessly activated and registered with your carrier after the new OS is installed—don't fret, this should happen automatically—and provides a brief summary of the installation process.  Hit Finish, grab a frosty beverage and/or good book and sit back and relax while you're new OS is installed. As mentioned above, this may take awhile so don't worry if the progress bar seems to be sticking on the "Connecting to the Device" stage—one of the final steps in the upgrade process.

If you're installing an operating system that's older than your current software, you'll want to download the OS to your PC and launch the .exe file just as described above.  But when you plug your device into your PC after opening the Desktop Manager, the app won't find any updates and you'll have to instigate the install process yourself. To do so, click the Application Loader icon on the Desktop Manager home screen and then click the Start box on the right side of the screen, beneath Update Applications. The software will then search for updates and won't be able to find any.  On the following screen, click the Advanced tab under Device Application Selection, make sure the list of applications on the next screen includes all programs you wish to include in the install and hit Next again. Choose to backup your application data on the following screen and hit Finish to begin the install.

You'll know your new OS is installed successfully when the Desktop Manager's Update Complete screen appears and your device's radio turns back on.  Shortly after the process finishes up, you should receive a message in you inbox to let you know your device is registered with your carrier's network. If you don't receive such a message, resend your device's e-mail service books.  You can send service books in two ways, using either your BlackBerry itself or your carrier's BlackBerry Internet Service (BIS) page.  To send service books via BlackBerry, open your E-Mail Settings/Set-Up Internet E-mail icon, log in if prompted, and click Service Books option under the Settings heading. On the following page, send the books by hitting Service Books again.

Close out the Desktop Manager, disconnect your BlackBerry and you're good.

- If you use any BlackBerry Internet Service (BIS) accounts, you likely want to resend your e-mail service books even if you're device was automatically reregistered. This ensures that you're taking advantage of any related tweaks that may have been included in the software update.

- Immediately following your upgrade, you'll be prompted to log back into a number of applications but some you'll need to manually open to enter your account information.  If you have a media card installed, you'll also be asked whether or not you want to turn your BlackBerry's mass storage mode on, regardless of your previous settings. You'll also be asked if you want to run through the BlackBerry Setup Wizard.

- If you're on a BlackBerry Enterprise Server (BES) you should check in with an IT representative before attempting to upgrade your smartphone's handheld software, because some IT policies can block or partially block a new OS install.