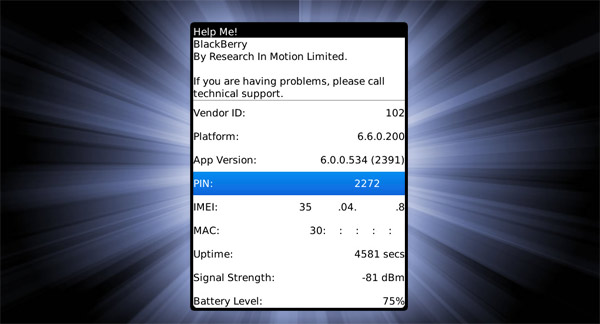 I tried to find something today, a tidbit of knowledge here at CrackBerry.com for Storm and Pearl users about getting to the Help Me! Screen. I couldn't find it. I remembered the gist of the information, I remembered writing the darn thing, and I still couldn't find it. When I finally tracked down the article, I realized the Help Me! Screen needed its own BlackBerry 101, and here it is.

For most BlackBerry users, it's a simple three key press top access this useful little screen. Press the alt, left shift, and H key at the same time. Don't worry about pressing them simultaneously, just make sure all are depressed at the same time. In other words, while holding both the alt key and the left shift key, press H. Pearl users can hold the alt key and type R A C E. Storm users will hold down the return (back) key while they click the top left corner, then the top right, top left, top right and release. Slightly complicated, but it works. Any further questions, head on into the CrackBerry forums.

So what information does the screen give you?