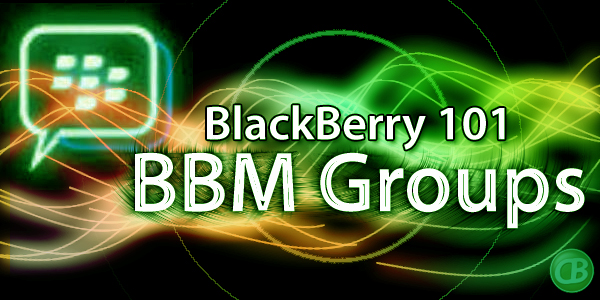 Back in October, we ran a poll to see just how many BlackBerry Messenger groups you belonged to. Surprisingly, out of nearly 10,000 votes, the vast majority of our readers don't use BBM groups at all. And that really is a shame.

You already know that BBM is a great communications tool, but did you know it could be more? BBM groups extends that simplicity of communication to an entire group of people. Instantly share photos, chats, and project lists with up to 30 participants.

We'll show you three real-world examples of how I use BBM groups; and then how to use them for yourself.

Around the time that the CrackBerry Idol accessory reviews started showing on the blog, several of the group started a CB Idol BBM group. We formed a friendship in that group. Rather than a have a bunch of back-stabbing, hate-filled contestants, the group helped each other with their reviews. We were in the group chat together when the round 2 voting results got posted. Now that was a moment. Elated that I had moved on; disheartened for my friends who didn't make it. BBM Groups brings people together.

Not long after we became a BlackBerry family, I put together a group of me, my two sisters, one of my brothers, and my dad. We haven't converted everybody, but we're working on it. The other night we all got together in the group chat to talk about an upcoming family vacation. Dad sent us all pictures of his new puppy, Fuego; my sister responded in kind. BBM Groups help you share and enjoy.

Not very long ago at all, we ran into a bit of problem. With all of our writers separated by thousands of miles and up to twelve time zones, it's difficult to keep everyone in know on important CrackBerry.com doings. We've tried email, but those sometime become lost in the inbox. We've tried spreadsheets; while those work, they get complicated quickly. Finally, we tried a BBM group and using lists. That did the trick.

We're now instantly able to communicate with each other about those aforementioned doings. We share a list of the articles we're working on. And again, we've helped each other find better and easier ways of doing things. BBM groups help you collaborate.

How to set up your BBM group

So there you have it, many different ways to use BBM Groups. I've listed just some of the uses I've found for BBM groups. If you're new to groups, how will you use them? If you've used groups for some time, how do you use BlackBerry Messenger groups?