On BlackBerry 10 devices, gestures are supported directly from the bezel itself. That means with a simple swipe in a certain direction, you can automatically take action. 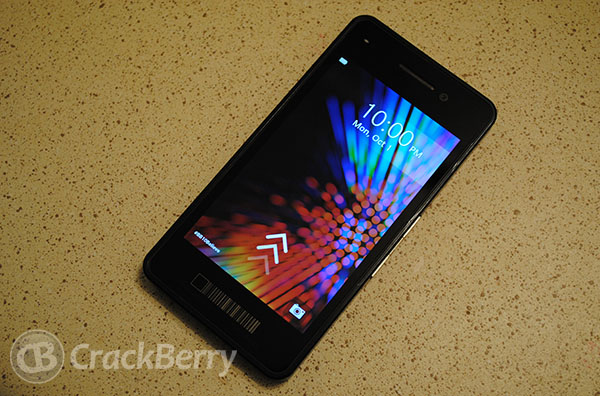 With BlackBerry 10 now full steam ahead, there are going to be plenty of changes that come with the new devices. Gone are the days of button navigation and it's full steam ahead with bezel gestures and swiping to make your way through the BlackBerry UI.

Much like when the BlackBerry PlayBook was released, RIM has released some guidelines that will help not only developers with preparing their apps for BlackBerry 10, but future BlackBerry 10 users as well.

If you're looking to learn more, jump below where we've laid them out for you as well as added some videos and additional context to show you exactly how the tasks can be completed.

Waking Up The Device:

On BlackBerry 10 devices, gestures are supported directly from the bezel itself. That means with a simple swipe in a certain direction, you can automatically take action. One action you'll want to know is how to wake up your device. As highlighted in the image above, a simple swipe upward from the bezel across the display will bring your device to life from a sleeping state.

With BlackBerry 10 there is a number of ways in which you can see exactly what is happening on your device. With that in mind, displaying your notifications is one function that is vital to everyday use. Notifications are pushed to the side of your active frames so that no matter where you are, even inside of an app, you can quickly peek into them with one swipe.

Following that gesture, you can then also enter into the BlackBerry Hub, which is the next step below. In the video below, you'll not see any notifications but that's simply because the current Dev Alpha build of BlackBerry 10 does not support them. When it does, we'll update the videos, but for now the image gives you an idea of how it will be or you can refer to some of our previous videos to see it in action.

With no physical back button to make use of, minimizing or leaving an application on BlackBerry 10 differs from that of any BlackBerry OS before it. Now, minimizing applications is as simple as flicking your thumb quickly in an upward motion from within the app itself. The app will then minimize and reduce itself to an active frame on your BlackBerry 10 device homescreen.

BlackBerry 10 introduces a new virtual keyboard for users to make use of. In all scenarios when the keyboard should be displayed and / or lowered it will do so automatically. However, for those times when you may want it present or to be able to move it out of the way, there is a gesture you can use to complete that task.

Swiping up or down with fingers will raise or lower the keyboard. That's not the be all, end all though. There are other ways to bring up the keyboard. For example, on the PlayBook a swipe up from the left corner will raise the keyboard and such is the case here as well.

Viewing An Application Menu or Settings:

Another carry over that BlackBerry PlayBook owners will notice is the fact that on BlackBerry 10, in order to access the app menu or settings within an app, often times you need to pull them down from the top. A swipe down from the top bezel will grant this access to additional options and settings.

This one might seem a little obvious but for a new user, especially one who has never used a touchscreen device before, it's not all that obvious. Scrolling on BlackBerry 10 touchscreen devices is all done through swiping up, down, left and right on the device display.

Another of those obvious scenarios but let's put an example behind it. Say you're in your photos which contains numerous pictures. Rather than viewing one, going to file view and then opening another, on BlackBerry 10 you can simply swipe left to right or right to left to view the next item in line or go back to a previous item.

When selecting such things as emails, tweets or an item in a list, it's as easy as just tapping on the entry you wish to choose and from there the selected function will continue. For example, if it was an email you would then be taken into the email to view it in its entirety.

Selecting multiple items in BlackBerry 10 is as easy as selecting one item as shown above. Remember, not all applications allow for selecting mutiple items and style guidelines call for a "toast" to be displayed should you try to pick an item which cannot be selected to let you know that is the case.

That said, a number of apps will allow for multiple selection. For example, if you wanted to delete multiple emails you can just tap on and select each email you wish to delete and they will be highlighted. A better example of this is in the video below which is using the "Bucketlist" sample app from the Cascades development tools.

As the name implies, it allows you to peek at your notifications and see whether or not they're important enough to you to draw your full attention. Peek can be accessed from pretty much anywhere you are on the device and more importantly, you never have to leave an app to be able to view it.

Peek is not an app; it's a flow, or in this case, a potential workflow as it leads into the BlackBerry Hub which serves as your universal inbox for every 'message' you may receive be it an email, a tweet, a BBM or any other account related notification you set up. Peeking into the BlackBerry Hub offers you a look at all the things happening on your device.

In some apps on BlackBerry 10, in the lower right hand corner you will notice three dots set up. This is called the action menu. Similar to swiping down for additional settings, developers can opt to put additional settings and options in the action menu as well. It's simple to open of course, you just tap on the three dots and you will then be taken to a new screen.

Zooming In And Out:

Just like every other modern mobile device on the market, zooming in and out on items in BlackBerry 10 will use the simple 'Pinch to Zoom' approach. When viewing photos, wallpapers and such a simple pinching outward will zoom in and a simple pinching inward will zoom out and return the item back to normal or give you a fuller view.

If you're not satisfied with the placement of items on your device or in this case, application icons, you can move them around to a place that is more fitting for your usage. You can simply hold your finger down on an icon until you see the icons pulse with a little trashcan beside them. From there, you move them from screen to screen or create folders by dropping one icon onto another. If you decide to create folders, you will then be asked to set a folder name / description.

Progressing or Scrubbing Through A File:

With the updated media player and media player controls, you'll be able to progress / scrub through media files with ease. A swipe across progress bar will further advance you through any video or music files you're currently accessing. The same is applied for reverse order as well. Missed a part and want to see / hear it again? Scrub back on the bar and capture that moment again. At this time, the BlackBerry Dev Alpha does not have a media player loaded but, we've seen it before in images and here is what you can expect.

All of the info here was found within the BlackBerry 10 developer guidelines. Some things may change but if they do, we'll go ahead and update the items accordingly.

If you're looking for the documentation yourself, you can hit the source link below to download the full .PDF file which also explains how developers should be building apps, the guidelines they should use and various other information pertaining to the "styling" of BlackBerry 10.

It's important to remember, nothing here is finalized. As noted, the info was taken from a draft documentation of BlackBerry 10 and is not entirely complete. There is a ton more gestures that can be used and some you can use in place of the ones listed. As we get closer to the launch of BlackBerry 10, we'll be providing a further look. Stay tuned!