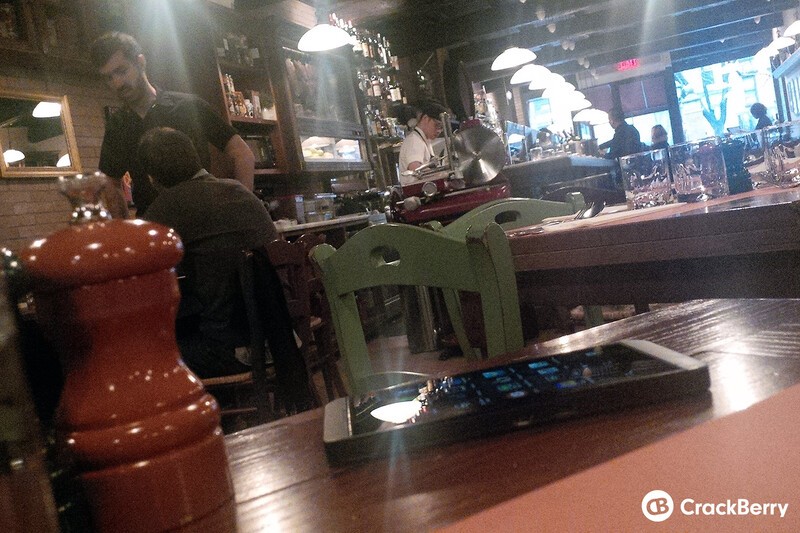 Earlier this week, between recording our CrackBerry Vodcast and Big Brother-style CB NYC HQ show, I took Adam and Bla1ze out for dinner to my favorite Italian restaurant in SoHo, Osteria Morini. The food here is amazing - I can't recommend it enough.

The service is always excellent and on this night it was also informative as our friendly table captain -- let's call him Mike -- turned into a BlackBerry case study of sorts for us, illustrating there is both much opportunity for BlackBerry and much hard work yet to be done in the competitive US market.

Upon being seated at our table and in true CrackBerry fashion, Bla1ze, Adam and I all had our Z10s busted out. When not in our hands, they were sitting face up on the table (and for the record, all three colors were represented - white, black and developer-edition red).

The conversation turned to BlackBerry as soon as Mike came to the table. With all the phones out, you could see him do a double and then triple take:

"Is that a new BlackBerry?"

We let him know that it was.

He picked up Adam's black Z10, and Adam showed him how to swipe the display on.

"Woah. This is different than other BlackBerrys. Is there a name for this OS?"

We told him it's BlackBerry 10.

We told him it's called the BlackBerry Z10.

"Never heard of it. Is it coming out soon?"

We told him it was already out on AT&T, hitting T-Mobile the next day and would be out on Verizon on Thursday.

"Cool. I'm on Verizon. Never heard of this at all. Good that BlackBerry has a new phone coming, they needed one. I used to have a BlackBerry Curve. Then I got an HTC Evo for a while. Picked up the iPhone 5 a few months ago. The only thing I missed from the Evo to the iPhone 5 was the swype keyboard. But the iPhone is sooo boring. How's the keyboard on this one?"

We showed him how the BB10 keyboard works, along with some of the gestures and the Hub, all of which he was pleasantly surprised and impressed with.

"I like the size of this. One of my friends came by the other week with this giant phone... Samsung... Note II. It was ridiculous. He liked the size I guess, but I thought it was too big for carrying around and typing. This seems nice. Let me compare it to my iPhone."

Mike pulled out his iPhone to size it up to the Z10. I explained how BlackBerry picked the size of the Z10 very deliberately to make it optimal for both two thumb typing while maintaining the ability to use it with one hand.

"Do you guys work for BlackBerry or something?"

Adam let him know that we were with CrackBerry.

"I know CrackBerry! I used to be on that site a lot back when I had my Curve. That's crazy."

We told him how we're chilling in NYC for a bit, seeing how the US launch goes and spreading the word.

"When's Verizon getting it again?"

We reiterated it would be available come Thursday.

"I'm going to have to go check it out. I think I'm going to get it. This is nice. I always liked my BlackBerry. I hope they do well with it."

From there we went about ordering and eating our delicious dinner. We chatted a few more times with Mike throughout the night.

Reflecting on our table conversation as we cabbed back to CB HQ after dinner, it was clear that a one-off conversation like this illustrated pretty well both the opportunities and challenges for BlackBerry in the US market. As somebody who follows BlackBerry so closely, I had a hard time accepting that a guy like Mike had not yet heard of BlackBerry 10 or the BlackBerry Z10. He wasn't a hardcore tech junkie, but he definitely wasn't clued out. He knew mobile enough that I feel he should have known about BB10 already.

Obviously there is still a lot of work for BlackBerry to do on the marketing front. Heck, there's work for CrackBerry to do on the awareness front too. With Mike being a former CrackBerry member, I was mad at myself that he didn't know about BB10. Expect to see some CrackBerry newsletters hit your email inbox soon - we need to get on reaching out to our 3.5+ million member database. There are some past members here who need to be informed of the new BlackBerry and CrackBerry.

The conversation also reminded me that when it comes to the competitive side of mobile, things are not as cut and dry as we sometimes think. Tech reviewers and tech enthusiasts feel like they have to score reviews, rate and compare every feature possible, and try to determine what is the best phone at any given moment for everybody. In reality, the average person tends to look at things differently. In this case, Mike had no loyalty to Android. He thought his new iPhone was boring (something we seem to hear more and more these days from iPhone owners) and was already ready to switch to something else, and he had no ill will against BlackBerry. In fact, it was quite the opposite - knowing there was a new BlackBerry he was ready to go full circle and come back to BB again. Definitely hope for BlackBerry in all of that.

The take away from all of this? Sell Like Hell. It's not just a cool quote from BlackBerry's CEO.... it's what they need to do!