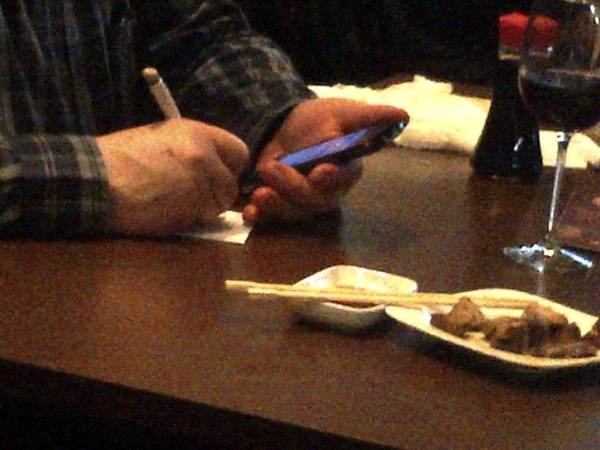 We've been hearing plenty of rumors surrounding BlackBerry 10 for a while now. As a matter of fact, they've been swirling about since before BlackBerry 10 even had an official name really and as we get deeper into things, we'll likely hear some that end up being true and some that are just way off base. That's just how it works. One place you're sure to hear a lot of rumors is near Waterloo, home of RIM and with that being the case we were sent the above image to get a look at. Along with it, came a note:

Saw this guy beside me with what looks like a BB10 phone. The top has the sloping feature similar to the photo that was published on your site today. It was fully touch screen. The headphone jack which caught me off guard was top middle similar location to the lock button on the bold 9900 - dead centre middle. U can sorta see a chrome bezel feature and to me it looks similar to the bold 97xx series

Now, we're not entirely too sure what the image may be. For all we know it could be a BlackBerry 10 device in testing or could just simply be some other device, it's hard to tell from the image. But it inadvertantly relates to another rumor that has popped up today surrounding RIM's keyboard design as they move to more touch-based devices.

N4BB posted some interesting information today, mentioning that RIM was working towards a new 3D virtual keyboard. One that would possibly be built by TAT using Cascades and would feature something called ‘vibration feedback' akin to that of haptic feedback. In addition to that, they noted that BlackBerry 10 would be built mostly using TAT's Cascades as well, something which we've only seen small portions of thus far but will be seeing more of as time goes on.

Now, back to image for above for a second. N4BB also stated their sources have confirmed there is BlackBerry 10 devices out there being tested. And those devices out there are unmarked, similar looking to a Samsung Galaxy S II but otherwise looking like the BlackBerry London as seen previously. Makes you wonder about that image up top.