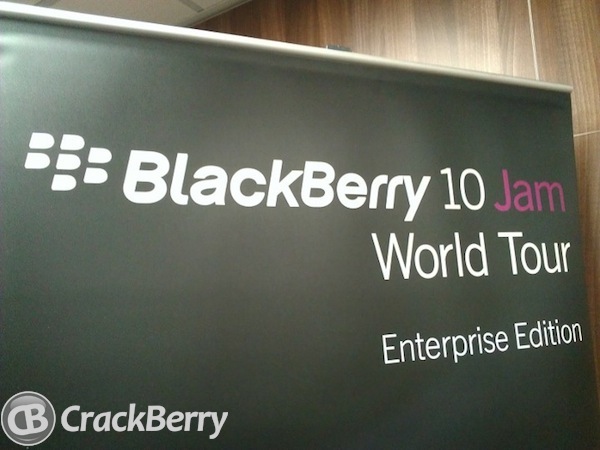 Earlier this week I spent the day at the BlackBerry 10 JamEnterprise Edition that took place in London, UK. I will be totally honest with you and say that my knowledge of BES is pretty much zero, but I'm not one to miss out on a BlackBerry event because as well as learning new stuff there are always interesting people to meet and chat with. Chris did a great post after he attended the event in Toronto as well.

I attended the first BB10 Jam in London some months ago and that was a larger event than this one although the Enterprise Edition did sell out. I'm not sure on numbers but I would take a guess at there being between 80-100 people who attended. Clearly the majority of these folk were developers and already work within the Enterprise market. What I did find impressive though was that about 15- 20% of the people at the event had not developed for BlackBerry before, so all the hard work that RIM has been putting into the dev support must be paying off. Mind you, with BlackBerry 10 (or what RIM has shown us so far) looking so good you can't blame developers from other OS's being interested.

The morning kicked off with Gregg Ostrowski, Senior Director of Enterprise Developer Partnerships, giving a presentation and luckily I was able to spend some time with him one on one later in the day. From a reporting perspective he didn't give me any new 'good stuff' we don't already know a about BlackBerry 10 but it is clear that RIM are going to be pushing the Enterprise side of the business as much as the consumer side when the new OS launches. Whether that includes marketing or just the RIM sales team doing their thing I can't say but they have a huge advantage over the likes of Android, iOS and Windows Phone in my opinion. Here's my theory anyway.

Traditionally the Enterprise market was where RIM was strongest at one point. Lets look at North America as an example. BlackBerry sales have plummeted as we know but there are still a tonne of organisations using BES, along with the likes of the police and government agencies who love BlackBerry for its security features. There are also many that have jumped ship to another platform so getting those customers back won't be easy but the way I see it is that BlackBerry Balance is one feature of BlackBerry 10 that could make all the difference.

We have talked about BlackBerry Balance numerous times here recently but just in case you missed it and have no idea what I am talking about I will summarize. BlackBerry Balance allows IT managers to partition the BlackBerry 10 device to keep work and personal applications separate.

If my memory serves me right a simple gesture down from the top of the device will reveal the Balance tabs where the user can toggle between the two options - work and personal. There are many benefits to this including the employer being able to disable/wipe all the work related apps/info on the handset if required. Another good example is Twitter. Say you have both a work and personal Twitter account and one evening you are going out for a night of fun and games (Beer) with your buddies. To prevent accidentally tweeting (while under the influence) from the wrong Twitter account you can lock the work Twitter account (or any other app) to cover yourself - an amazing option if you ask me.

Another example is BlackBerry App World. If you are an Enterprise user you will have access to two App Worlds as one will be in personal mode and one in work. Again, your company can restrict or give you access to certain work related applications in work mode, but by simply using the BlackBerry Balance tab to jump into personal mode you can have access to all the normal consumer apps we all love. If you were to do this on a BlackBerry 10 device you would even see both App Worlds on your home screen. Sounds a bit weird but actually it's extremely clever and as far as I am aware unique in the mobile industry.

Those are just a couple of examples and I am sure there are plenty more that we have not even seen yet as BB10 launch is some months off still. But from me being a BlackBerry addict and also working in sales for 15 years I can see BlackBerry Balance as a real winner for RIM when it comes to winning back (and retaining) Enterprise customers.

I am sure that in the comments of this post we will see some people saying it's too late and that organisations have migrated to another platform and are happy. And for some that will be the case - but RIM stand a real chance here and I am not just saying that as I write for CrackBerry. I have also taken a back seat and looked at what RIM has to offer the Enterprise market from an outsiders perspective and if I was a current or future BlackBerry customer I would like what I have seen so far.

Of course, winning back lost customers is never going to be easy and if RIM can do it, it won't happen overnight, but give it time for BB10 to be out there and they are in with a shot - I am convinced.

I have kind of digressed from just talking about the London event so let me get back on track briefly. Speaking with developers at the event they all seemed confident in RIM which is a great sign. Once again, this partly comes down to the developer support that they are providing. One chap I was talking to is so much happier developing for BlackBerry 7 (Enterprise apps) compared to Android - another positive vibe.

Overall I think the Enterprise Edition was a big hit for all that attended. RIM also held the same event in Canada so you will more than likely (if not already) see some feedback from our crack team that attended that location. And in terms of BlackBerry 10 Enterprise coverage here at CrackBerry we are working towards getting an expert on board to help us out so we can provide you with the best content possible. All this technical developing stuff baffles the hell out of me!