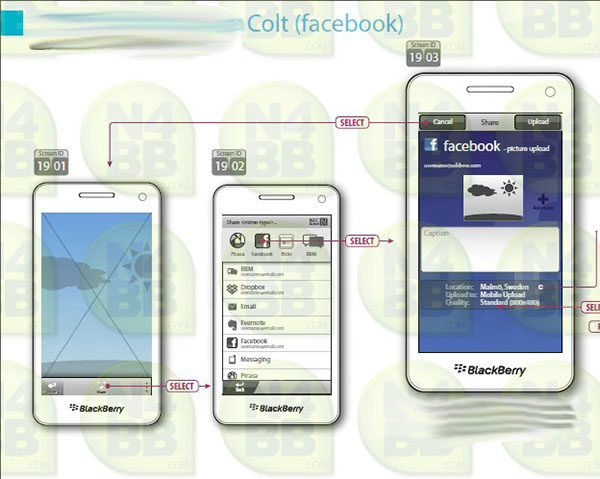 With RIM tucked away now working on BlackBerry 10, it's going to be a while before we start seeing any finalized renditions of what may come to consumers hands in Q1 of 2013 but to help fill the void of what normally would be upcoming device leaks there is some internal slides being floated around. Previously there was some Twitter and Facebook concept images but to further those along, N4BB has posted up their own set of internal slides showing off Facebook alone and how RIM plans to implement their sharing options across multiple applications.

The images of course, are undated so there is no telling how old they are (wagering a guess though, I say before BlackBerry World as the Colt is being referenced) in comparison to the reality of where RIM is at with BlackBerry 10 and their in-house developed Facebook app right now but they certainly do offer some insight into the logic of sharing in BlackBerry 10, which is similar to that found on Android and even iOS at this point.

You'll have to accept the normal disclaimer as well, nothing in these slides give the impression they are finalized so alas, things are always going to be subject to change. That said, we know TAT will be adding some polish to everything so it should all come out looking tip top when all is said and done, what do you all think?