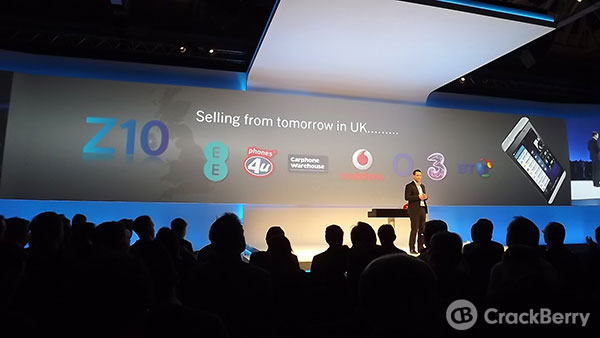 The BlackBerry Z10 has been available in the U.K. since January 31st 2013. I'm pretty quite a few of you will have got yourself a shiny new toy already but here at CrackBerry we like to help out every which way we can and so I present to you the BlackBerry 10 Buyer's Guide: UK Edition.

A few carriers have yet to make the BlackBerry Z10 available direct, like Three but with Carphone Warehouse and Phones 4U covering all the networks, you can pretty much get it on all networks already. Have a browse below and see which network and pricing tickles your fancy. One thing to note too is that all BlackBerry Z10 phones in the UK are 4G ready. We'll be updating this regularly as and when carriers change pricing or start to sell the BlackBerry 10 devices, so be sure to bookmark this page for future reference.

So far, EE is the only U.K. carrier that offers 4G (in selected cities around the country). With EE, you get unlimited calls and text, so you're more or less paying for data with your monthly charge. The plans below are for a 24 month contract.

Even though Orange is part of EE, in order to avail of the 4G speeds EE offers, you have to go onto one of their plans (see above). However, if you don't mind your 3G speeds or because your area won't be getting 4G right now you can take a look at what Orange has to offer. The plans below are for the Panther tariff which gives you more data than others.

Like Orange, T-Mobile comes under the EE umbrella but since you need an EE tariff to avail of the 4G speeds, you can continue with T-Mobile's offerings if you just want 3G speeds.

The offers from Vodafone are a lot more simple, as you can see they just have four tariffs you can choose from. The only difference between the last two is that you get 3GB of WiFi every month with the £47 plan.

O2 have quite a few tariffs available with varying minutes, texts and data included, as well as extra perks with the plan. I've included the more favourable ones here but you can visit the O2 website to check them all out. The plans below are on a 24 month contract. 18 month contracts are available but you pay more upfront for those.

Phones 4U isn't a carrier, more of a mobile retailer and they sell devices for all the networks. So, while Three is yet to have the BlackBerry Z10 available, you can drop into Phones 4U to get one on their network.

Phones 4U sells the BlackBerry Z10 on the same plans you see above for all carriers, however what you'll find is that the upfront fee will vary, with some being free where you would pay when buying direct from the carrier. They can also offer a few other things on top too - more minutes, data, accessories.

Phones 4U is also currently the only place you can get the white BlackBerry Z10. In a bizarre move, the black Z10 cost £70 more than the white one. I guess they want to make the most of the exclusive right to sell the white one that their pushing that, if you're looking to just buy without a contract anyway.

For more information on Phones 4U BlackBerry Z10 deals

Carphone Warehouse works pretty much the same way as Phones 4U. They also seem to be offering the BlackBerry Z10 for free from £36 per month. Much lower than getting it direct from the carriers. Carphone Warehouse are also known to include free accessories bundles too, so that may draw the appeal.

As already mentioned above, Phones 4U has the white Z10 exclusively at the moment but while browsing the Carphone Warehouse site, it is showing that you can pre-order the white Z10 for a delivery date for February 18th. So, Phones 4U doesn't have the exclusivity for long.

It also seems like Carphone Warehouse pulled away from selling the Z10 SIM free as there is no longer any details on their website other than it being on contract.

If by any chance you're looking to buy other BlackBerry devices, you can check out our other U.K. BlackBerry Buyer's Guides below.