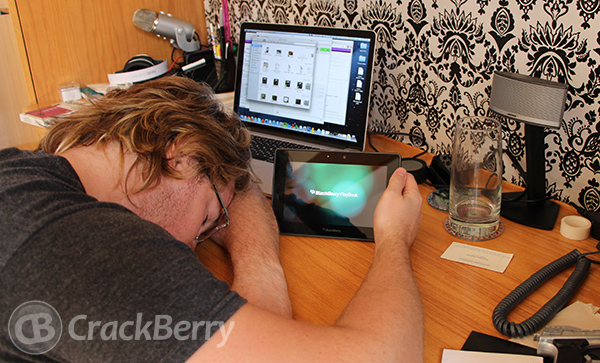 For those of use who own a BlackBerry PlayBook, there are so many things we've come to love about the tablet. For me it's the convenient size, awesome video quality, super fast multitasking and, unlike the iPad, the ability to drop movies onto it from nearly any format.

Unfortunately, the boot time of the PlayBook is not among the features I adore. It currently takes about 3 minutes to boot up a PlayBook running OS 2.0, which compares to about 30 seconds for my iPad. This is a massive difference. If my PlayBook crashes (rare, but it happens), the delay is utterly frustrating. I usually switch to another device instead.

Recently I confirmed through my own sources that this is going to be a whole lot better on BlackBerry 10.

I already knew Research In Motion was putting a big push on improving the boot time, but I didn't have any information on the technical details around it.

Here's what I learned: Apparently the PlayBook OS boot up sequence loads up all drivers that could ever possibly be required by any application. Loading up all of these drivers is one of the big reasons the boot time is so slow. The 4G PlayBook isn't much faster, either, according to this reboot test run by Bla1ze.

I'm told that, in retrospect, RIM realizes that it was a mistake to push everything into the boot up sequence. But it is what it is, and the result was a poor user experience when pressing the power button.

Will RIM be able to get down to 30 seconds? I'd love to know. I can't see any reason why it isn't possible. Even my 6 year old Macbook (running Tiger) boots in 30 seconds. And it's booting from hard drive!

Yes, several members of the CrackBerry team have handled the new hardware. But I'm pretty sure nobody was allowed to do a battery pull, so at this point we're waiting to find out just how much improvement RIM has baked into its newest OS.

When we know more so will you.