The long awaited, much anticipated BlackBerry 10 BBM Stress Test is officially over.

Conclusion? BlackBerry 10 running on the BlackBerry Z10 passed the test with flying colors. We absolutely slammed our Z10 with BBM invites. From there, we accepted the requests until we hit BBM's max capacity of contacts, eventually capping out as high as 2072.

Once the invite dust settled, we spent a day using the Z10 under "normal conditions" and the usability and performance of the device was unaffected. Everything worked 100% as it should. The only difference was that with over 2,000 eager to chat contacts now on our BBM list, our productivity dropped to zero as we spent the day talking and putting BBM Video Chat to use. :)

Compare BlackBerry 10's performance to the two times we tried the BBM Stress Test before on the BlackBerry Bold 9000 and 9650 and there is no comparison. In the past, this test rendered the phones useless - both during and after the test.

Kudos to the BlackBerry software guys, for building a mobile computing platform that is stable even when under "attack".

You can almost think of the BBM Stress Test as an "attack" of sorts on BBM. By preannouncing the April 1st, 12 noon EDT start time on CrackBerry, we literally had thousands of awesome readers lined up and ready to take part in the experiment.

It was 12:04pm when I publicly posted my Z10's barcode and PIN to this CrackBerry post. Within seconds, the BBM requests started pouring in. The BBM invite count immediately began counting up sequentially at a rapid pace. It was so fast the notification sound you would normally hear didn't sound (though on occasion we would hear a chime or two).

In reality, it appeared that we had literally thousands of people add us to BBM at the same moment, but to our Z10 the invites came through in metered fashion. In other words, we didn't jump from 0 invites to 2,000+ immediately, but they counted up one at a time. In just a few minutes we passed 1,000 invites. And from there they continued to roll in, passing the 2,000 mark.

We had previously heard that BBM on BB10 had a cap at 2,000 contacts, and that any requests beyond that would simply be ignored. That wasn't totally the case though. The invites continued to rack up.

Kudos to the software guys for building a platform and BBM app that can finally handle a CrackBerry-style BBM Stress Test!

At that point, we began approving contacts one by one, starting with the first ones that came in at 12:04pm. This is a tedious process as there is no "Approve All Pending Contacts" option on BBM. In hindsight, we *could* have run things smarter to make the approval of contacts automatic. Had we only posted the our barcode on the web, forcing people to scan the barcode from their BB phones (vs. adding via pin) and had we left our Z10 on the BBM display barcode page, then all of the contacts would have been added automatically. We would have been simulating being together in the same room. We did take advantage of this option for a while and it worked as more invites continued to roll in, but after a while adding contacts via this manner didn't seem to be going as fast as approving them manually, so we went back to adding people from the start.

We did a live webcast of the entire process, with Bla1ze and I taking turns approving contacts. It took a few hours to tap our way up to over 2,000 contacts.

During this initial "attack" phase, we chewed through the battery on the Z10. Keep in mind we also had in our hand the whole time, with the display on full brightness outputting to HDMI on a tv, but there's no doubt this kind of inbound attack keeps the radio cranking at full effort. The phone got pretty hot. We went from a fully charged battery to a dead one in under two hours.

During this phase, the phone remained completely usable. We browsed web pages with ease. We even did a few BBM video chats while the BBM invites continued to pour in.

We did experience a few glitches of course. At one point we hung up on a BBM Video Chat, but the phone thought the call was still ongoing - even with every app closed on the phone, the little phone call time indicator on the homescreen continued to count up, and other people trying to call us could not get through. We eventually had to reboot.

The Hub also quit on us at one point and didn't want to restart after restarting with the magical five swipe gesture.

I sort of expected to see BBM crash and out close a few times, but it didn't

BBM remained surprisingly stable and fast throughout the process. Bla1ze and I were both surprised. I sort of expected to see BBM crash and out close a few times, but it didn't. Scrolling on the screen remained quite fast. There was definitely some "lag" in the experience, but this felt more like lag on the data transfer in and out of the phone as there was simply such a backlog of stuff happening vs. lag on the phone itself. For example, when changing our BBM status, once changing it and returning to the main contacts page, it could take 10 or 15 seconds before the new status showed up. 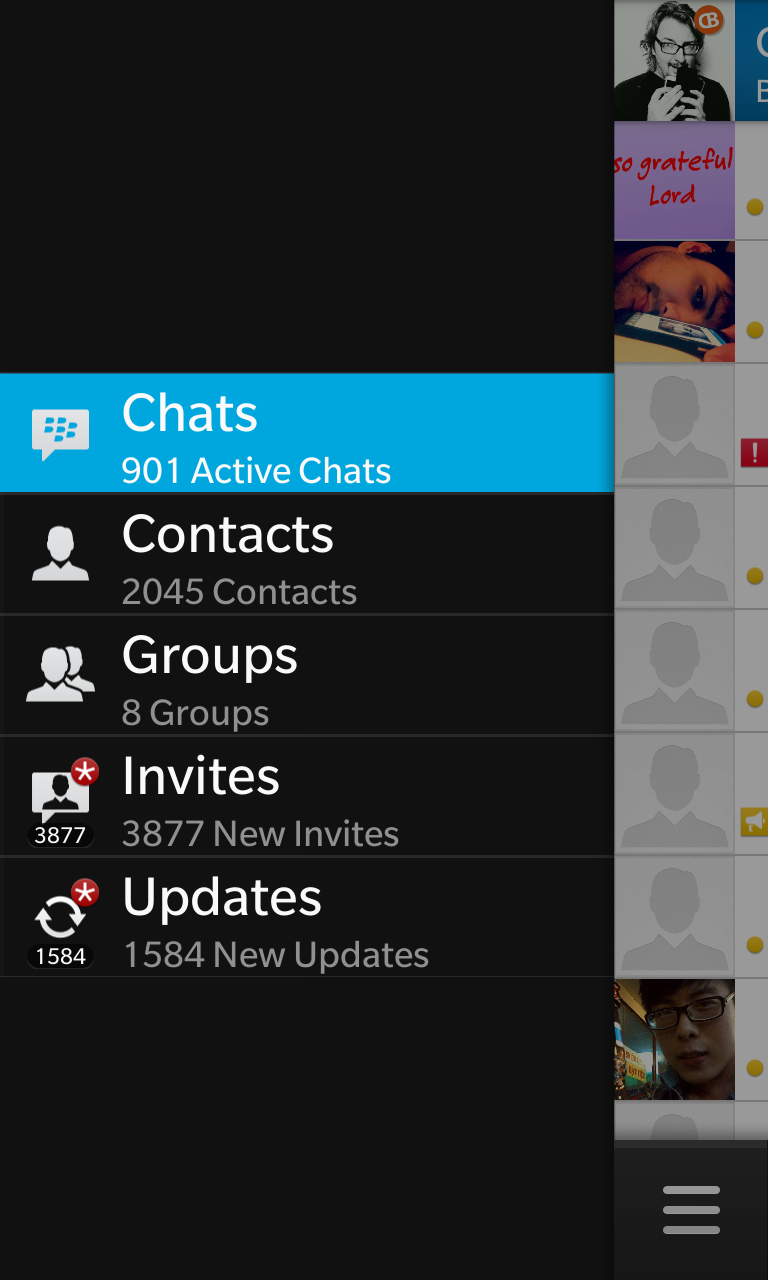 Once we maxed out our contacts, the invites continued to roll in. Eventually the invites slowed down and we were left with thousands more invites that we couldn't accept. Well, that's not *quite* true. We can still open up invite requests and hit Accept, but nothing happens. New requests will come through too.

With the attack over, the phone settled into normal rhythm again and was completely usable. We created BBM groups. We sent some broadcast messages to hundreds of people. We used video chat, etc. BBM ran fine. And the rest of the phone continued to run fine too.

Even battery life on our test Z10 has been OK, though in this case we really only have one email account connected to the phone and our maxed out BBM list. We're going to keep the phone rocking and using it as we normally would - installing apps, hooking up more accounts, etc. But overall, the Z10 is holding up strong.

Kudos to the software guys for building a platform and BBM app that can finally handle a CrackBerry-style BBM Stress Test!

If you have 2,000 people you want to add on your BBM list, our recommendation would be to not add them all at once as we did here. The "attack" is the hardest part of the Stress Test on the phone. If you add your contacts organically, which should be the normal case for 99.999999999% of users, you shouldn't run into any issues BBM'ing to your heart's content.

Huge props and thank you go to everybody who participated in the test! The CrackBerry community never ceases to amaze me - you're all awesome. Seriously, we had a 1,000+ people tuning into the live stream for hours as we conducted the initial experiment. Just amazing.

It was such a good time, I'm thinking we may just have to do it again when the Q10 comes out. Sound like a plan? :)