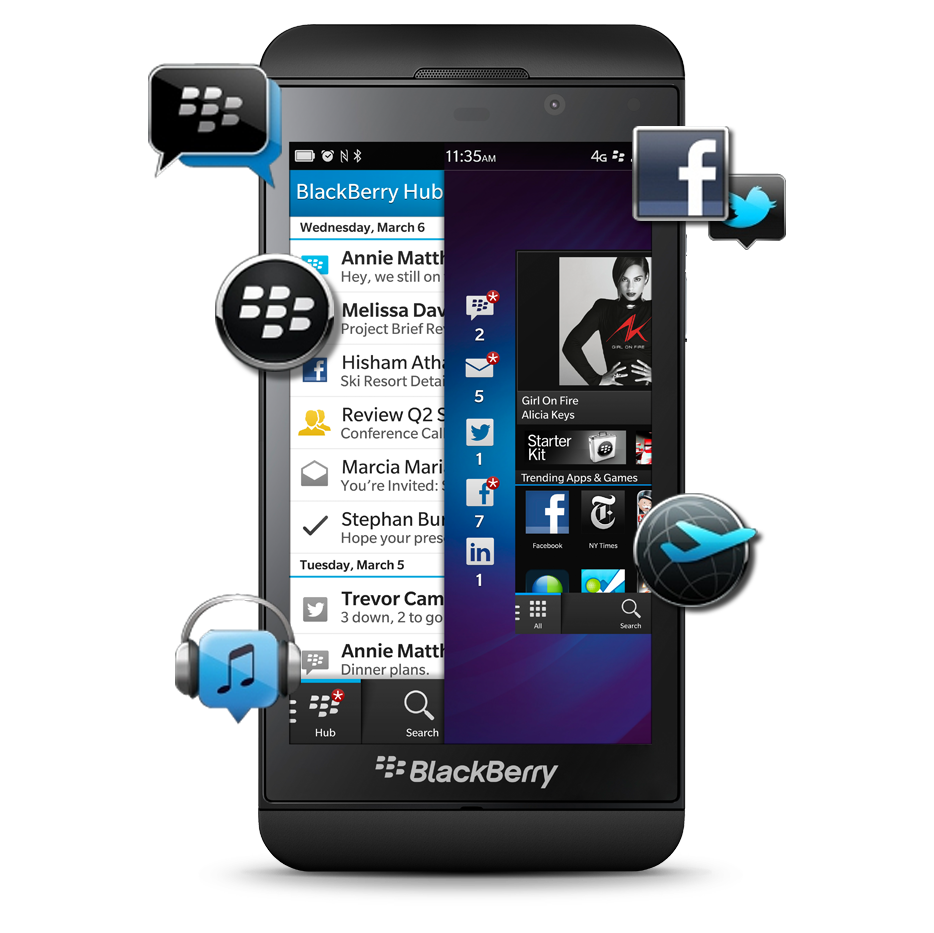 BlackBerry 10 heralds a new dawn for apps on BlackBerry. Prior to the launch, BlackBerry employees tirelessly worked with the developers, both established and new, to bring the applications to their next generation platform. The result was been nothing short of outstanding. Rich, smooth, and fast 3D games populate the central marketplace, BlackBerry World. Functional apps are also available in a wide variety of categories, including finance, location, news, photography, health, audio, social, and plenty of others.

BlackBerry 10 apps are developed in a wide range of ways. For one, Android applications can be run on BlackBerry thanks to a dedicated runtime. Tech-savvy end-users can even sideload Android applications onto their BlackBerry 10 device. Popular middleware solutions such as Marmalade enables developers to bring their apps into BlackBerry 10 easily, while partnerships with major 3D engines such as Unity enables game developers to bring their creations to the platform. Those more familiar with CSS, JavaScript, and HTML 5 can produce apps through the BlackBerry WebWorks, plus the Cascades user interface tools can make apps very handsome with minimal effort. Of course, developers willing to go all-in with BlackBerry 10 can write apps in C++ within a familiar framework.

As developers continue to prepare for BlackBerry World removing paid apps, we're seeing more BlackBerry 10 apps turn from paid to free and the latest are being made available by Sven Ziegler IT Solutions.

Grab all 21 of Burning Platform's BlackBerry 10 apps for one low price!

If you're loading up on paid apps before BlackBerry removes them from BlackBerry World on April 1st, you won't want to miss out on grabbing as many Burning Platform's apps as you can. Luckily, you can snag all 21 apps in a bundle for one low price.

With Nemory Studios being one of the more active BlackBerry 10 developers, updates to their core lineup of apps to support the incoming BlackBerry World changes have now been released.

It's actually the same format.

Get on the latest version

Reminder: Update WhatsApp on BlackBerry 10 to ensure it continues to work

This is just a reminder for all you folks out there using WhatsApp on BlackBerry 10 to ensure you're running the latest version available from BlackBerry World.

Sound Scheme for BB10 takes your OS notifications to the next level!

Want to up your web browser game on BlackBerry 10? Then Browsie Browser is the app you want and luckily, we've got 150 free copies available while they last.

1.3.6.1 works perfect on my classic but has problems on my passport (the videos keep stopping by themselves) . Are there any settings i didn't know about ? It still works at my classicIt is sluggish...

Toysoft offers some of their best BlackBerry 10 apps free for limited time!

Toysoft has created a ton of great apps for the OS and in turn, has received plenty of love back from the community. As part of a thank you promotion, Toysoft has for a limited time gone ahead and dropped pricing on some of those great apps.

Rad Systems BlackBerry 10 apps updated across the board

If you're using any of the several great apps put out by Rad Systems, you'll want to load up BlackBerry World and check for updates.

There is nobody!Perhaps that answers your problem?

Having issues with WhatsApp? Make sure you have the latest version

Have you been having issues with WhatsApp on BlackBerry 10? If so, you'll want to make sure you have the latest version installed.

Looking for some great utility apps? If so, Utility Bundle from Burning platform offers eight great apps for one low price!

If you have been having issues making use the BlackBerry Virtual Expert app since updating to BlackBerry 10.3.3, the fix is now in.

Understood, thanks for your work conite.

Enjoy these free apps for the holidays!

QtHelex is offering not one, but two holiday promos for select apps!

200 copies while they last!

SecureX is a native pattern and number lock app application. It offers an array of options and features to ensure that your BlackBerry remains locked and protected at all times. Using code SECUREXCB you can download 1 of 200 free copies.

BlackBerry rolls out a small update to BBM on BlackBerry 10

Are you on BlackBerry 10 and feeling a little left out when it comes to BBM updates? If so, there's finally a new update now available through BlackBerry World.

Maybe you could try to extract the .bar file? You'd help me and others a ton!You can't extract native apps. You need the source file from the developer.